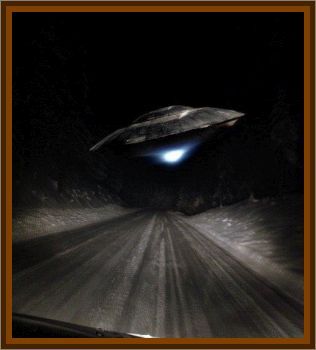 I was in 10th Grade. I was on a date and we parked out in an empty field across from the Greenville Country Club. It was nice so we sat on the hood of my 1967 Mustang. There were trees around the edge of the field and the city lights beyond that.

Then we saw a disk like shape coming over the trees. Slow, no sound. A Disk with a bubble top and 3 prongs below.

Then a strong light beam came from underneath and lit up the ground as it moved over the tree tops. It went over near the WAMS Radio Tower and was gone. Lights out. No sound what so ever.

Moved very slowly at a paced speed. My date was also in 10th grade at another school in the area. I have not spoken with her in many years so I will not reveal her name at this time. She saw everything that I saw. We kind of froze at what we were seeing.

I had powerful driving lights, actually my dad had small airplane landing lights, replacing the regular standard lighst, so I could have lit up the entire forest and UFO, but I was not sure that was such a good idea, so we just watched.

Amazing really. Opened my mind to many things