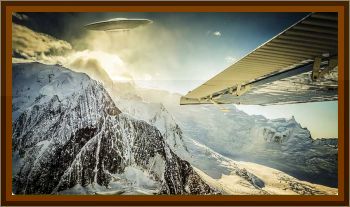 I was officer in charge of a detachment of 3 Navy patrol planes operating out of the new US air base at Thule, in northwest Greenland,some 80 miles from the North Pole. The primary mission assigned our four engine, World War II Privateers was ice reconnaissance. That meant flying out over the Kennedy Channel, Smith Sound, Baffin Bay, and the Davis Strait and plotting the location of the pack ice and large bergs. That data was relayed to the ships that each summer resupplied the chain of arctic radar stations known as the DEW line.

Our secondary job, not to interfere with ice reconnaissance, was to support a group of scientists conducting cosmic ray research. About once a week, when weather conditions were right, they sent up a huge, translucent Skyhook balloon with a package of sensitive photographic plates suspended under it. The balloons would drift downwind at an altitude of 90,000' - 100,000', where the atmosphere, spun thinner near the poles by the rotation of the earth, was sufficiently attenuated to permit the cosmic rays to make their telltale traces on the photographic plates. When the plates had been exposed for a few hours, the scientists would send a radio signal to the balloon, exploding a small charge, cutting the plates loose, and returning them to earth under a large, bright red parachute. Our job was to fly above any overcast, keep the high balloons in sight, and report the landing location of the parachuted plates for recovery by helicopter. The high-flying gas bags were equipped by low power, low frequency radio transmitters to which we would tune our radio compasses so their needles always pointed toward the balloons.

These were easy flights, always in good weather and always at an altitude safely above the tall, cloud-shrouded bergs and coastal rocks we often had to dodge on ice patrol. Each of us had 2 or 3 of those milk runs while deployed to Thule, and we rather enjoyed the change of tactics and routine, as well as the virtuous feeling that we were helping to advance the cause of science.

This is why I was surprised to find one of the other plane commanders as tense and pale on return from a balloon chase as though it had been a hairy combat mission or a close encounter with a berg or a mountaintop. Lt. John Callahan was a salty, steady professional pilot, so I knew when I saw him walking in from his plane that something serious had happened on that flight.

What the hell's the matter John? I asked him. You look as if you'd just survived a midair!

Ed, you're not going to believe it. I'm not even sure I do, and I SAW it. And so did O'Flaherty & Merchant. At least most of it. And I don't think they believe it either.

I followed John into the line shack where he wrote up some minor gripes on his airplane, then into our little ready room where we poured ourselves coffees and sat down. John was not acting at all like the Callahan I knew. Although he was an experienced and highly competent naval aviator, John Callahans normal manner was outgoing and cheerful, even jovial, with lots of smiles and laughter and banter, even after a low-level hurricane penetration or a long patrol in instrument weather. Not this day. Now he was deadly serious and obviously shaken. The last time I had seen a man like this was in wartime.

He was flying at 10,000' in the clear with the balloon in sight high above and the radio compass needle locked on to the balloons transmitter. Through the one set of binoculars carried in each aircraft, he and his copilot, Lt. Bill O'Flaherty, occasionally inspected the balloon and its instrument package, trailing beneath like the tail of a kite. Everything looked normal for most of the flight. Then, on a routine check with the binoculars, John found something very abnormal about the balloon and its payload. He looked for a long time and then passed the glasses to O'Flaherty.

Callahan: Take a look at our target, and tell me what you see.

O'Flaherty looked, lowered the glasses and glanced sharply at John, then looked again.

O'Flaherty: Jesus Christ, John there are 3 bright silver disks attached to that instrument pod! They weren't there the last time I looked. Where the hell did they come from?

Callahan took the glasses back and looked again. They were still there exactly as the copilot had described, 3 shining, saucer-shaped metallic objects clustered on the hanging trail of the balloon just above the black dot of the science package.

On the intercom, Callahan called the plane captain to the cock-pit, then handed him the binoculars.

Callahan: Take a look Merchant. What do you think?

The captains reaction was the same as the copilots.

Merchant: What the hell are they? Where did they come from?

Callahan took the glasses back and studied the strange objects for several minutes while O'Flaherty maneuvered the Privateer to keep the target in sight. Then Callahan sucked in his breath and held it. What he was seeing could not be happening. The 3 objects had detached themselves from the tail of the balloon and formed up into a compact V formation. As Callahan watched incredulously, they executed what looked at that distance like a vertical bank to the left and accelerated to a blinding speed that took them out of sight, climbing in about 3 seconds. Callahan handed the glasses back to O'Flaherty.

Callahan: They're gone, he said slowly, CLIMBING from 90,000'. Never saw anything turn so tight or move so fast.

Back in the ready room after the instrument pod had landed and its position had be reported, this was the aspect of the phenomenon that most affected Callahan.

Jesus, Ed, he told me, from the angle of the sky those things passed through in the seconds they were in sight, at that distance, they must have been going tens of thousands of miles an hour. They must have pulled a hundred Gs in that turn. And what the hell climbs out, ACCELERATING from 90,000'?

John sat down that day, while it was still clear in his head, and wrote a full report of the incident. It went through the chain of command to the Office of Naval Intelligence. A report was also made to the Air Force authorities at Thule. There never has been an explanation, nor even an acknowledgment of the report. The phenomenon exists today only in the memory of John C. Callahan, his copilot, & plane captain.