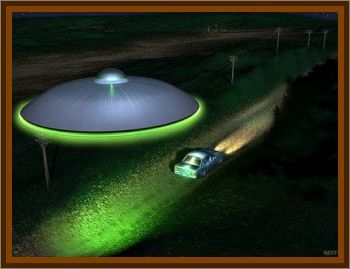 Marion and Jim took a drive from Jacksonville to Daytona Beach, leaving shortly after midnight. They arrived at approximately 3:30 a.m. At this time Marion was experiencing a severe headache. They returned to Jacksonville, arriving at 7:00 a.m. Afterwards Marion realized that more than three hours time of the trip down was unaccounted for, neither had any recollection of stopping. She spent most of the following month in bed, depressed and listless, unable to go to work.

On the back of her left hand an acute itch developed, and several rather long, dark hairs grew on this spot, vanishing and returning to normal some 6 weeks later. She noticed a circular mark, about the size of a dime, on her right cheekbone.

In November 1977, under hypnosis, Marion recalled that a few miles after leaving Green Cove Springs, a brilliant white light shone into the car from above and behind them, and they heard a buzzing sound, which became painfully loud.

Both became unconscious. The next thing she knew she was standing in a curved hallway, a sliding door opened and she walked into a small wedge shaped room, then from the narrow end of this into a larger room containing several tables. A short man with gray skin, large eyes and ears, no hair, and a small slit like mouth was sitting at one of the tables, wearing a gray tight fitting suit. He led her into the examining room, telling her telepathically that he meant no harm, but wanted to examine her.

She took off her dress, leaving her slip on, and got up on the table, where she was given a physical examination that lasted 40 minutes. He touched her with an instrument that tingled, and took skin scrapings from the side of her hand, they put some kind of machine on her right cheekbone, which hurt a little bit. After the examination she was floated up to the control room, where the ceiling was transparent, showing the stars; here there were 3 other men, one, the captain dressed in white and taller than her, the other two in gray and shorter than her. The doctor pointed to a spot in the sky to show where they came from, the trip, he told her, took hardly more than an instant.

Their time is different from our time. He told her also when the planets align the earth will roll in the heavens and there will be much destruction, they want to help us so that we all will not be lost. They will take with them anyone who is not afraid to go with them. They have the secret of eternal life. All of the humanoid's conversation was telepathic, not by sound. One of the men escorted her out, where she met Jim again, they were floated down to the ground and escorted back to their car.