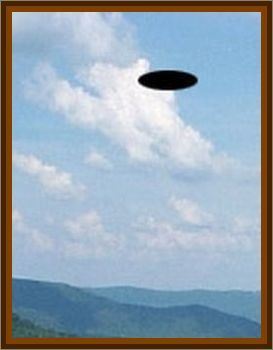 It was 6:00 p.m., when Kenneth Green, a CNT lineman at Destruction Bay, happened to glance out while sitting at home and saw something move at the top of the mountain behind his house.

That's funny, there must be somebody with a snowmobile up there, he said to his wife.

But immediately the two realized that at that distance the mountain, about 5 miles away, is more than 6,000' high, and in the dimming light, a snowmobile almost certainly would not be visible whereas this object had a spread of about 2". Obviously they were looking at something more the size of a couple of freight cars.

Ken got his binoculars and he & Mrs. Green studied the object.

It had a wide oval shape and, while I couldn't tell for sure, it seemed to he brownish in color, Ken stated. What was most noticeable was a cone shaped light beneath it, as if it was controlled by a thrusting device. This thrust or whatever it was changed colors, mostly between red and yellow. When the object moved vertically, the cone was directly beneath it, and when it moved horizontally, the cone trailed at an angle.

At first the object stayed near the top of the mountain, then after a few minutes started to descend.

It seemed to be flying a few feet above the surface of the mountain and came about a quarter way down, moving quite slowly, Ken said. Then it headed over to the mountain next to it. After a few minutes over there, it flew part way back and disappeared through the notch between the mountains.

Ken figured the total time of sighting was half an hour. During this period the Greens' neighbors, Tom Glare, diesel technician for CNT, and his wife had also observed the object. Others at the camp saw it as well.

Ken Green, a thorough man, later checked with transport department officials to determine if there were any helicopters in the area at the time. There were none.

Oh, there's one thing I almost forgot, he added, about 10 minutes after the thing disappeared, I went outside to see if it was there again. It wasn't, but I did see a white vapor trail leading across the lake to the point where the object went between the mountains.

Did the object reappear and leave the trail in its wake, or was it left by another UFO joining the first? Naturally Ken did not know but he was sure of this:

That notch between the mountains leads right through the mountains behind. I know because I've been up there. Whatever it was, that thing knew what it was doing.