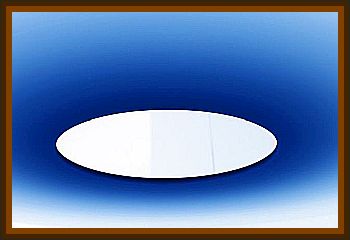 Whilst travelling home in my car with my wife when I saw a very bright oval shaped object rise up from behind a house.

Although it was very bright it did not hurt your eyes to look at it. The object was slowly rising steadily above a house in the street. I stopped my car to observe it the object then started to move off to the right with its speed increasing. The object then moved to the right at an estimated speed of about 20 mph.

It then abruptly change course by about 80° and was then obscured by other houses. I restarted my car and chased after it down the side street and at this time it was out of my vision. When it got to a position in the side street where I would have expected it to have been it was gone.

Although I was with my wife at the time, a serving police officer, and we both agree that we saw it.

It is disturbing to me that we both seem to have a different recollection of when and where we were when we both observed it, a difference in time of apparently only a few hours. I believe we saw it at about noon however my wife believes she observed it with me later in that afternoon at about 4:00 p.m. and in a different location.

A few days later I decided to go and photograph the same location where I believe I had observed it and with the aid of photoshop I was able to recreate a copy of what I believe we saw.