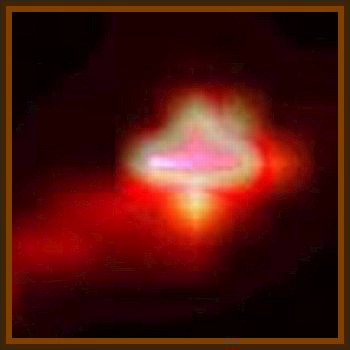 UFO testimony is one thing, but when you receive testimony backed up with a quite spectacular UFO photograph, well that’s another matter.

It was on November 12, 1991, at around 9:30 p.m., that friends Phil Trevis, previously known as Peter Muir, a pseudonym used in previous accounts, and Paul Penman, also a pseudonym, were out taking photographs for a project called Light and Dark. The following is the written testimony by Phil Trevis:

My friend and I were taking photographs of the BP chemicals plant in Grangemouth, from Polmont Reservoir, when we noticed a dim, or rather, 2 small dim flashing lights over by the flashing pylons, at Kincardine Bridge. We watched the object, which we thought was a helicopter, fly slowly over from the bridge to above the brightly lit Grangemouth Stadium. We watched it hover for around 5 minutes.

It was then that we noticed that the craft wasn’t making any noise. Normally, if it was a helicopter, we would have heard the blades. It then turned around and faced our direction.

It was roughly 2,000' above the ground, then it dipped and increased dramatically in speed. At the point of the photograph, it was about 200' to 300' directly above us. It was then that we heard the light pulsing hum of the object.

My friend and I were quite shaken at the time, but afterwards had an overwhelming sense of excitement.

We conducted the usual lines of investigative enquiry to try and get to the bottom of this incident. We ascertained that there was no aircraft activity in that part of central Scotland that night. Letters to the British Petroleum plant at Grangemouth, asking them if they had any small light aircraft or microlights in operation above their complex that night, on pipe inspection duty, came back stating that no such light aircraft or micro lights were flying above the plant that night. The BP plant at Grangemouth is in controlled airspace, only special authorization can be given for overflights of this highly explosive complex.

Such was the closeness of this object that Phil Trevis had to bend over backwards to take his photograph, and so what you are actually looking at is the underside of the object, concave, with numerous bright flashing lights being thrown out into the dark night sky, which creates a sort of halo effect. The object is consistent with what was being sighted above and around the small town of Bonnybridge in Stirlingshire, central Scotland, the town of Bonnybridge is still experiencing UFO sightings, but not as many as those which peaked between the years of 1992 to 1994.