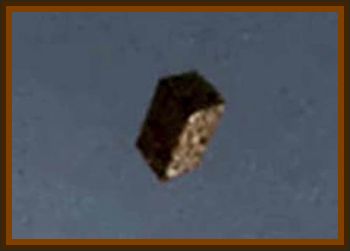 In the early 1960s we lived in Kansas. We were small children then had a house on the North End of Great Bend, on the North end of Morton Street.

One night in 1964 or 65, I looked out of the kitchen window and saw a white cube that glowed like a light bulb. It had a red light glowing on the inside of it. There are, or were quite a few radio towers in the area and one huge TV 2 tower farther to the North.

The cube shaped thing flew around that radio tower like a moth flies around a light bulb, only slower than a moth and it never hit the tower. Also, the red light was fading on an off like the tower light.

Now, I believe the object was trying to communicate with the tower. When I first saw the object I was transfixed like a deer in headlights. I ran to get my dad but like most dads, he said not to bother him, so I ran back to the kitchen yelling for my 2 brothers to come. When I got back to the window it was still flying near the tower.

Just before my brothers got to the window it traveled across the field towards me. It started hovering around 75' above the ground and was approximately 500' away.

That’s when my 2 brothers joined me at the window and started asking:

It spun so fast that it morphed into a spinning ball and appeared as a white streak as it shot almost straight up angling towards the northwest and was gone. We were very excited at witnessing how it zoomed away.

That was fast, really fast, reverberated in the room.

Years ago a man asked me about the sighting. He showed me a lot of pictures of UFOs and asked if the object looked like any of them?

When I said No, he suddenly wore a strange expression on his face. I have no idea who he was.

All I know is that he was someone my dad knew. I would like to ask him where he got the pictures and if this sighting was some sort of simulation. The object was very clear, a perfect shaped cube, not at all blurry.

As it flew around the tower it really tumbled and then sped across the field at 100 to 150 mph, rolled a little, but as it hovered it stayed on a perfectly flat plane and slowly turned. It glistened, not bright like a 100 watt light bulb but still glowing. The light was uniform throughout the object. The red light inside the craft disappeared after a few seconds, then it spun into a ball and left.

As I mentioned, the object was cube shaped and reminds me now of the Star Trek Borg ships. I would like to know where the show’s creator, Gene Roddenberry, got the idea for that cube ship, although, the only similarity between my sighting and the Borg cube was its shape.

I believe we saw the object because we are not alone on this planet. Whatever we saw flying around that radio tower still intrigues me today. The way the craft moved makes me believe it was under intelligent control. It maneuvered deliberately from field to field, sped up and slowed down and changed height. It was the size of a small box truck: 20' wide by 20' long.

Today, I believe that the craft was just curious as if it had just discovered us by perhaps following the TV signal with the sub carrier wave to its source.

This is a true story and I wanted to share it.