Object With Entities Over Manufacturing Plant 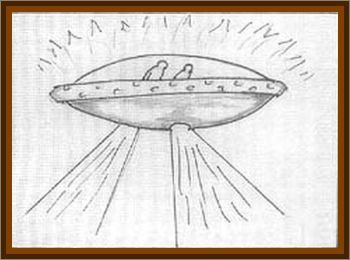 I was a supervisor in a local factory when a fellow employee who was on break called me outside to look at something coming toward the plant from the northwest.

Due to bright security lights we could not see the whole shape of what was a craft. What we did see was part of a circle with solid windows or openings in it. There was a red background light inside the craft.

While we watched we could see several silhouetted figures moving about. One was looking over the craft edge and appeared to be looking in our direction. The window that the figure was looking down from was sloped out at the top and bottom forming a 'V' shape.

Whatever it was, it was moving along at a leisurely pace of approximately 10 mph. and approx. 200' - 300' from the ground. I could see that as it floated along it did not have a smooth movement, but seemed to wobble on its axis. The vehicle was moving toward the southeast. All this took place after 8:00 p.m. It was dark outside and we were unable to determine the sized of the craft.

I have kept this pretty much to myself over the years due to the jibbing that I had received for even mentioning it. I have always been a structured type of individual and tell things as they are. I have given approximate dates on the sighting as I had never written this event down.