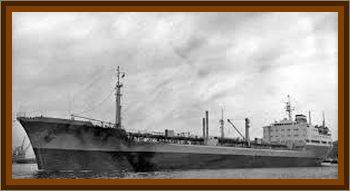 Location: Mediterranean Sea - 20 miles East of The Straits of Gibraltar

The following UFO Report by Alexander G. Globa, a Russian sailor and engineer, who observed a UFO over the Mediterranean Sea at close quarters through binoculars in June 1984. This report was included in a declassified CIA UFO File on Soviet UFO Sightings. It was also included in Water UFOs. It is considered by many to be one of the best reports of the internal structure of a UFO ever recorded. From the files of and editorial notes by Robert Morningstar.

In June 1984, the Soviet tanker Gori was in the Mediterranean, 20 nautical miles from the Straight of Gibraltar. At 4:00 p.m., Alexander G. Globa was on duty. With him was Second in Command S. Bolotov. They were standing watch at the left bridge extension wing when both men observed a strange multicolored object.

When the object was astern, it stopped suddenly. S. Bolotov was anxious, shaking his binoculars and shouting: It is a flying saucer, a real saucer, my God, hurry, hurry, look!

Globa looked through his own binoculars and saw, at a distance over the stern, a flattened out looking object, it reminded him of an upside down frying pan. The UFO was gleaming with a grayish metallic shine. The lower portion of the craft had a precise round shape, its diameter no more than 65'. Around the lower portion of it Globa also observed waves of protuberances on the outside plating.

The base of the object's body consisted of two semi disks, the smaller being on top, they slowly revolved in opposing directions. At the circumference of the lower disc Globa saw numerous shining, bright, bead like lights. The seaman's attention was centered on the bottom portion of the UFO.

It looked as if it was completely even and smooth, its color that of a yolk, and in the middle of it Globa discerned a round, nucleus like stain. This observation took place during the day.

At the edge of the UFO's bottom, which was easily visible, was something that looked like a pipe. It glowed with an unnaturally bright rosy color, like a neon lamp. The top of the middle disk was crowned by a triangular shaped something. It seemed that it moved in the same direction as the lower disk, but at a much slower pace.

Then the UFO jumped up several times, as if moved by an invisible wave. Many lights illuminated its bottom portion. The crew of Gori tried to attract the object's attention using a signal projector. By that time Captain Sokolovky was on the deck with his men. He and his Second in Command were watching the object intensely.

However, the UFO's attention was distracted by another ship, approaching at the port side. It was an Arab dry cargo ship, on its way to Greece. The Arabs confirmed that the object hovered over their ship. 90 seconds later the object changed its flight's trajectory, listed to the right, gained speed and ascended rapidly.

The Soviet seamen observed that when it rose through the clouds, appearing and disappearing again, it would occasional shine in the sun's rays. The craft then flared up, like a spark, and was gone instantly.