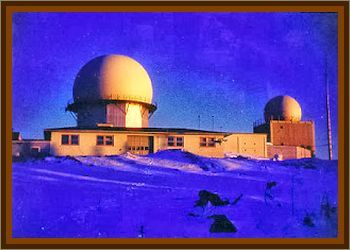 A severe winter storm was raging and winds were gusting up to 70 mph. The storm was so fierce that the F-94 all weather jet interceptors, that were normally on hot alert, were ordered to stand down and were cabled to moorings in order to prevent them from being damaged by the high winds. No air traffic had been detected by the radar all night. Heavy snow was falling and the visibility was probably less than 75'.

The radar in service at Goose Bay that night was a CPS-5 of WW II vintage. A new FPS-6 installation was being built on a nearby mountain top but would not be operational for another six to nine months. The CPS-5 contained no method for canceling the reflections from nearby mountains and other objects, known as ground clutter, which showed up on the radar screen as large solid masses blanking out any returns received from aircraft flying overhead in the same area. The ground clutter for the radar site at Goose Bay extended outward from 20 to 40 miles, depending upon the azimuth, from the location of the antenna. It was impossible to continue to track targets once they entered an area saturated with ground clutter.

Around 11:00 p.m. a target appeared on the radar screen. It was located about 90 miles out and approaching from the north at an approximate speed of 90 mph. The radar in use was not equipped with any method of measuring altitude, so the height of the target could not be determined. The fact that the target was approaching from due north, 0° on the radar screen, was very unusual since no military or civilian airfields were located in that direction. Its slow speed of travel was equally strange. Most aircraft that approached Goose Bay from a northerly direction were flights coming in from Thule, Greenland. where the United States was building an air base and radar site. The azimuth direction of such flights, as displayed on the radar screen, was about 045°.

The target continued southward at a constant speed and heading. Since the operations room had no record of the flight, the target was classified as an unknown and the F-94 jet interceptors were told to scramble. Normally the jets would have been airborne in less than two minutes but as mentioned the jet squadron had been ordered to stand down due to the storm. It took almost 45 minutes before two interceptors became airborne. By that time the target had entered the ground clutter and it was not possible for the ground radar controllers to effect an interception by the jets.

Within minutes after the unknown target had disappeared into the ground clutter, two more targets moving in formation, appeared on the radar screen. As with the first target, these two were detected about 90 miles out and were traveling at the same slow speed of 90 mph. Unlike the first target that had a bearing of 0°, these two had a bearing of 045°. The radar operations controller immediately directed the two airborne F-94’s onto an intercept course. Two more jets, which now were sitting on the end of the runway in a state of hot standby, were scrambled. They were airborne within minutes and directed toward the two unknown targets. Two more jets were placed on hot standby and another two as backup. In the meantime the first target remained hidden by the ground clutter.

The F-94 jets were equipped with airborne radar mounted in the nose of the aircraft. It is not unusual for these aircraft to be able to quickly locate the assigned targets using their own radar and bring themselves along side any unknown target in a matter of minutes. Such was not the case that night. None of the four jets that were then airborne were able to detect any type of target. Their movements continued under the direction of the ground radar controller who was able to observe all 6 targets on his screen. Over and over attempts were made by the ground controller to intercept the unknown targets. Each time the report would come back from the jet pilots that no targets could be observed. All of the time the two unknown targets moved closer to the edge of the radar ground clutter that extended out from Goose Bay. Once they entered this area there would be no way to continue to track them. Out of desperation the ground controller started to bring a jet and a target so close together that the two targets would appear to merge on his radar screen. Obviously the danger of a collision was great as a result of such a maneuver but none occurred and neither did a sighting of the targets by the jet pilots. A final exercise was tried before the targets became lost in the ground clutter. The jets were directed to fly as low as possible. They were then positioned to be directly underneath one of the unknown targets. Once in that position they were instructed to climb as steep as possible until they reached their maximum altitude, all of the time searching for the target with their airborne radar. Even though this maneuver was attempted several times the jet pilots were unable to detect the unknown targets on their radar.

All of the time that the mystery targets were being tracked by the ground based radar they maintained a constant speed and direction and held their formation. The unknown targets were either unaware of the activity that swirled around them or were not bothered by it. For 45 minutes every attempt was made to intercept the targets and every attempt failed. Finally, around 12:30 a.m., the two targets disappeared into the ground clutter and no longer could be tracked. During this time the first target did not reappear on the outer edge of the ground clutter as expected but remained hidden by it. The four jet interceptors were directed to continue a search of the area even though help was no longer available from the ground based radar and no targets appeared on their airborne equipment. All members of the ground operations crew maintained a watch on their radar screens, awaiting for some sign of the unknown targets.

Around 1:15 a.m., while the storm continued to rage, the first of the three unknown targets reappeared on the ground radar screens. Within a couple of more minutes all three targets were once again plainly visible. They had joined into a single formation and were headed southeast at an azimuth reading of 135°, towards Newfoundland. Their speed continued to be 90 mph. It was fairly obvious that Goose Bay had been used as a rendezvous and the first target had waited overhead for 45 minutes until the second and third targets joined it, at which time the three of them established a new southeasterly course.

Two more jets were scrambled the moment the targets reappeared on the radar screen. All six jets streaked through the storm, crisscrossing the skies, attempting to make some type of contact with the elusive targets. The action continued for the next hour without results. All of the time the targets moved southeast at a constant speed of 90 mph and in formation. The targets were over 100 miles southeast of Goose Bay when they finally faded from the ground based radar screen and were seen no more.

The jets were recalled to their base and returned to their normal standby status. The pilots found it hard to believe that the ground radar operators were able to track targets that they were unable to detect on their airborne radar. The airways were filled with various derogatory remarks directed toward the ground operations personnel, including requests to clean the fly shit off of their radar screens. The jet pilots had placed their lives at risk with no results. Not only were they flying in below minimum conditions due to the storm but were directed to fly into areas that were thought to be occupied by other aircraft. The loss of one or more of the jets could have easily occurred.

Goose Bay is a very isolated air base. No land lines connected it to the outside world in 1953. Communications with its headquarters, located at St. Johns, Newfoundland, was limited to radio transmissions. Such communications were greatly affected by atmospheric conditions and signals often had to be resent several times before a complete message could be transmitted. The events of that night created a radio operators nightmare. The position of each target had to be transmitted to St. Johns every two minutes. The messages had to be coded and all responses decoded. The terrible weather disrupted almost every transmission. It was 18 hours after the last siting of the unknown targets occurred before all information relating to this event was finally received by Newfoundland.

Enough preliminary information was received in St. Johns though, for them to understand what was happening. Later in the year I read an article that was published in Colliers magazine about UFO’s. The incident at Goose Bay was one of several events described. According to the article, the targets were never detected by the radar in Newfoundland or by any other radar station. The article continued by stating that warnings from St. Johns caused the entire Northeast Air Defense Command to be placed on a Red" alert, and bases as far south as Washington DC to be placed on a Yellow alert.

I have often wondered what really took place in the skies over Goose Bay that night and how the event was officially recorded. After leaving the air force, I studied electronic engineering then participated in the design of radar transmitters. The only hypothesis that I have formed relates to the operating frequencies of the two radars involved. The lower frequency ground radar was able to detect whatever was out there that night, but the much higher operating frequency of the airborne radar prevented it from detecting anything.

There was definitely something in the sky that night that was under intelligent control. The three craft used Goose Bay as a rendezvous point and as a reference point for establishing their new course to the southeast. Their slow speed and how they navigated in such terrible weather remains a mystery.