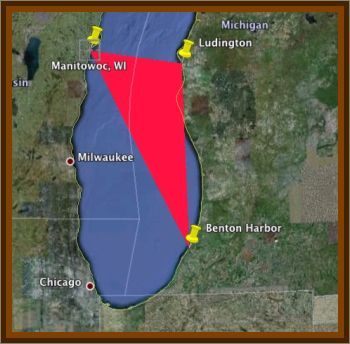 Approximately 6,000 shipwrecks have occurred on the Great Lakes with the death toll totaling upwards of 30,000 lives.

Many of these craft, ships and aircraft alike, have disappeared under mysterious circumstances, often lying hidden for decades before their final whereabouts are discovered, and sometimes leaving behind little or no traces of their disappearance at all.

This causes some to believe that something more powerful than even a gale force storm may be at play, something strange, perhaps paranormal.

For decades, many have thought that the inland waters of the Great Lakes may actually have a mysterious, perhaps magnetic, force at work similar to that of the Bermuda Triangle. Calling it The Great Lakes Triangle, there are those that believe these mysterious disappearances may have been the result of some unknown force of nature yet unseen or discovered by science. So much mystery surrounds some of these events that their stories have made their way in to modern mythology and urban legend.

Because of the irregular shape of the Great Lakes, pilots, aware of the dangers within, ordinarily circumnavigate the lakes, even when overflying might be shorter. It is almost impossible for even the slowest aircraft to be more than 20 minutes from land. Today's airliner can cross Lake Erie through the middle in ten minutes. Faster aircraft can do it in much less than four minutes. Over any point on any of the Great Lakes it is possible for the pilot of any jet airliner to shut down all his engines and literally glide to land. There are hundreds of ground-based, sea-based and air-based radios constantly monitoring emergency frequencies for any sign of trouble.

Aware of the curious incidents over the Great Lakes, the Federal Aviation Administration several years ago instituted a special Lake Reporting Service, pilots on Great Lakes overflights make continuous reports to ground stations. A 10-minute delay in such a report automatically launches a search and rescue operation. This service has saved many lives that would have been lost to ordinary accidents, but the high incidence of inexplicable disasters has remained unaffected.