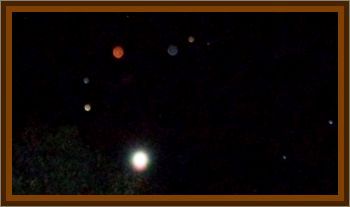 My name is Phyllis Atwater and I am a writer. On October 5, 1986, I was pursuaded to be taken to Pine Bush, about 60 miles Northwest of New York City, to look for UFOs. I was with two friends and a guide. One night, suddenly, on a small side road between farms we saw an astonishing occurrence.

Globes of light were bubbling up from behind trees, then gliding sideways at tree top height, then either continuing to rise higher or change direction and glide back. All the globes or light balls were large and seemed in no hurry. They would first appear as pure white when hovering above the tree tops, then they would cut loose and turn blood red. Colors were pure.

The lights were steady. After gaining height and moving closer to us, the globes would change color again, this time to green, which made them almost disappear in the black sky. I heard a high pitched whining sound as they got closer to us. When the light globes turned green, other flashing lights were visible all around them and the globes then appeared more triangular in shape.

When we tried to move in closer to the lights we were warned off by a local farmer who said it would be dangerous. He said the lights were a regular occurrence in that location. In good conscience I can't say definitely whether they were or were not UFOs, but I know they were not any kind of aircraft I have ever seen before.

I feel the matter deserves serious investigation which it has not received as of yet.