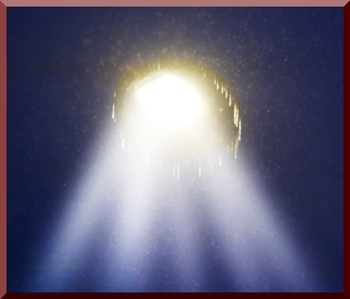 While driving from Glennallen to Anchorage in a remote wilderness area, we observed a very bright light apparently on the road from a high ridge about 2½ miles and several hundred vertical feet above the light.

As we drove down the hill we lost any view of the light. The road at the bottom of the hill turned approximately 90° to the right, and then went up perhaps 30' vertically and about ¼ mile horizontally before we could see the light again.

It was painfully brilliant to our dark adapted eyes and we slowed the vehicle more and more as we drew closer because we could not see the road in front of us well enough to drive, finally drawing to a complete stop approximately 200' from the object.

Multiple flashings of the high beams to attempt to get the light reduced did not help, and we slowly creeped forward in small spurts until we were approximately 150' from the light source.

We waited perhaps 5 minutes for the light to change in some manner or another and began to get rather alarmed at the strangeness of it. I made some comments about the fact that the light was super brilliant on the trees for as far as a line of sight carried it, but that it didn’t reflect off of the metal of the car very intensely, so that I surmised it had some sort of polarization to it.

At that point our irritation turned quite sharply to fear when the unusual and unexplained nature of the event forcibly hit us.

We backed up slowly for about 50', approached the light again slowly, freaked out, turned the car around, and raced back around the curving road through the 90° left turn and up the long, tall, straight hill. It’s embarrassing, but in our adrenaline flushed brains, we had felt the car was bumped or jostled as we were approaching the light the second time, and we hit a top speed in excess of 90 mph in our subsequent flight. The car was floored all of the way up the hill and well beyond. We traveled approximately 5 miles away from the light, and away from our intended destination, at high speed before we felt safe enough to pull over and discuss contacting the Alaska State Troopers.

We shortly decided that we had been rather cowardly, and did not want to be grist for the media grill, or the subject of jokes and rubbings.

Accordingly, we elected to return to the top of the large hill to observe the light from afar.

Our second trip to the top of the hill confirmed that the light was still there. And we watched it for what seemed like a long time, though it may have only been a few minutes.

There was no other traffic in either direction, and the light was unwavering. We were too spooked to investigate with another close approach to the light, and we attempted to restore our self respect by making a quasi scientific observation:

The light was of the apparent brightness of a large stadium light pack. It had a color temperature of 8000 or higher, an actinic blue/white that destroyed our night vision if we stared at it too long.

It seemed to be a uniform rectangular source approximately 30' by 20' in size when we approached it closely, but appeared to be oval in shape when viewed from above and at a couple miles distance on top of the big hill.

We finally decided to return to Glennallen and report our sighting to the Troopers, or at least just go back and keep the whole thing to ourselves. We had only driven back towards Glennallen for about 2 minutes when a light source appeared to be coming from the Glennallen direction. This time however, it was a large tractor trailer rig, a huge truck with a huge trailer that was literally barrelling down the road at 65 mph, we clocked it.

We stopped and followed the rig. We began to look forward to seeing what would happen to the scarey USO, Unidentified Sitting Object, as the comfortingly huge and purposeful symbol of human industry plowed toward it. At the top of the large hill, and cruising in the wake of the big rig, we saw the light still sitting there, less than 3 minutes away as the truck briefly hit 70 mph on the downhill stretch. We came to the bottom of the hill, turned the 90° corner to our right, and coasted along in the wake of the giant truck, an irresistible force. As we came to where the light had been seen before, there was nothing.

We hurriedly scanned everywhere, but stayed close to the truck. No lights, nothing. Within the next 5 minutes, we passed several cars going the other direction, but never saw anything that even remotely looked like the strange light.

On a return trip later in the week, we stopped at the place where we had had such a fright a few nights before. I personally walked the pavement in the area, but could see nothing out of the ordinary. We never knew what to make of the strange event, but have rarely driven a remote road at night without remembering it.

It has been more than 20 years as I write this report, so I apologize for any inaccuracies or forgotten details. I have not observed any other unexplained phenomenon in my life.