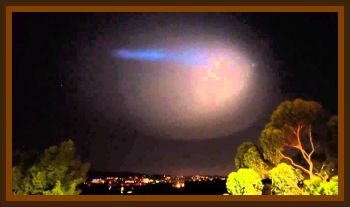 My friend, Bob Conover and I, of high school age had decided to go up onto the flat roof of a 3 car garage which was located right behind and next to the back fence of the apartment complex in which my family resided.

It was a part of the property directly behind our apartment complex. We had 2 sleeping bags that we carried up there and the weather was incredibly clear for the Los Angeles area due to a so called Santa Ana condition by the weather bureau.

We were truly amazed at the clarity of the night sky with very little light pollution from the ground and we kept commenting about it as we laid ourselves down on the flat roof on top of our laid out sleeping bags.

I would say that about an hour passed as we both lay there gazing intently at the unusual amount of stars and planets we could see. We both had a good interest in astronomy, and in my case, I had some rudimentary knowledge about the universe, our solar system.

My memory is vivid when it comes to the next stage in our experience. We both noticed and commented on how we were seeing the sky in a new way in that we became so accustomed to gazing at this wondrous scenario that we could actually perceive the stars and planets in 3D to some degree.

Instead of seeing brighter or dimmer, we saw closer and further and were both amazed at the phenomenon. A few minutes passed after that last perception when Bob, who was right next to me, suddenly was looking across my body toward the horizon of the East, pointing and excitedly saying:

The direction of our bodies was: feet – South and heads – North, and I was to Bob’s left. As I quickly followed his pointing arm and finger I saw what made my whole psyche vibrate with an uncanny and new feeling of awe.

There were 5 greenish light circles or disks coming from the East horizon toward us. As we both gazed intently at these smoothly moving sky, we noticed that as they came directly over our position, that they had gotten there very quickly, and without a single sound.

There was an eerie silence, especially for Glendale, CA, a suburb of L.A.

Once they passed into the western horizon we jumped up and jumped off the roof, a risky feat, due to our super high emotional state. It was clear to both of us that the total time sequence of the straight trajectory of these objects from horizon to horizon took less than 9 seconds. We couldn’t get over that there was no sound.

As we hit the ground and ran into my family’s apartment, we told my parents who were moved by our state and helped us find someone to call on the phone. After a few minutes of discussion, we decided to call the California Ground Observers Corps to report the incident in as much detail as possible. When we were able to speak to someone at the Corps, and tell our story, they were very positive in their reception of the info and also told us that others had seen the same thing.

They told us that no planes were in the area of the flight path of the objects and the everyone was mystified.