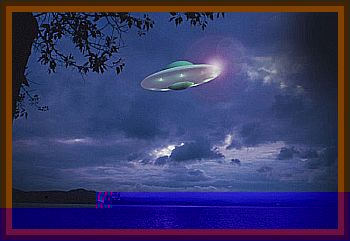 The witness was walking his dog and saw a spotlight in the sky and thought it was from the nearby Hampden Park stadium, but the spotlight turned into a glowing orb and began to fall from the sky making no noise.

He thought of Chinese lanterns but curious to see one up close, he left his dog in his house and traveled to the large woodland area a mile from his house where the orb landed. He found the gate leading into the field guarded by a military police van along with several armed soldiers.

He remembered a hole in the fence, so he crawled through it and made his way toward the glowing light. Then suddenly the glowing light disappeared and when he got to the end of the tree line he saw a large craft. At first he actually thought it was one of those stealth bombers, but it was too complicated looking to be one. The craft stood perfectly still just inches above the ground. A crowd of elderly soldiers stood in front as if expecting someone. Then out of nowhere this giant man appears in front of the craft. It certainly wasn’t human and not like anything he had ever heard of before. He thought they were supposed to be small gray men with big eyes, but this one was taller than any living person he’d ever seen. It stood upright like a man and had two arms and two legs. It wore a sort of tinfoil suit and its face was like a lizard, its nose and eyes were like a bat, but its mouth was huge. It stepped over to one of the men, and by this point the man measured up to its lower stomach. The man began talking but he couldn’t make out what he was saying, but the alien or whatever it was, brought out a small ball looking purple thing and closed its shiny eyes.

The witness then brought out his cellphone and began recording. He waited 8 minutes until the footage ran out. The alien disappeared again and the craft, all different colors, began glowing brightly as it silently shot into the sky. The boomerang looking craft vanished, but he took a quick picture at it before it did and then he made his way home.

He immediately got his USB cable and put the picture and video on his web site, but not even 3 months later a knock at his door was followed by the police raiding his house, claiming there was reports of child pornography on his PC. As his PC taken away he was gob smacked.

Then a day later he was asked into the station. He went and they said his PC was clean and had been sent back to his house. A man there wearing a suit said he’d give him a lift home and as he did, he took a detour and took him to a flat in Govan. There in the apartment waited two 40 something strong looking men smoking and each of them had a pistol in a shoulder holster. A man wearing a military uniform told him to sit and repeatedly asked if he had any more copies of the UFO or the Draconian as the soldier said.

He destroyed his mobile phone and told him to keep quiet or his pregnant fiancé will lose the baby when giving birth. He obviously agreed and ever since, he sees the same UFO in the sky every night when he walks his dog, as if stalking him.

But not long ago from now, he doesn’t know if he was dreaming, but his room was blindingly lit up. He fell backwards and he swears he didn’t fall down on his carpet, it was like concrete. He knew he wasn’t in his room.

A tall similar looking alien stood over him wearing a purple robe. It did not look alien, it looked extremely human. It was male, had eyes like us, skin like us, hair like us, and a nose and mouth like us, but this being was taller than the witness by one foot. But it was smaller than the lizard looking alien. This being communicated with the witness in English, and told him the Draconian will eat him if he talked to others about it. The Draconian is a warring, bloodthirsty race. The Draconian hates mankind after they were exiled from our planet 11,000 years ago.

This being said, it was the Anunnaki, creator of modern mankind. An immense amount of information went through his brain, 300,000 years ago the Anunnaki come to our planet to conquer or make allies with it and found it populated with Draconians, descended from velociraptors and reptiles, and other humanoid intelligent species were the Draconian’s slaves, what we would call cavemen. The Anunnaki made peace with the Draconian and for thousands of years they shared technology, and space travel, alongside each other in interstellar wars. But because of the over grooming the Draconians started to get out of control and demanded the Anunnaki leave Earth to themselves. The Anunnaki refused, causing a war or as the Bible states, a war in the heavens to determine mankind’s fate, the Anunnaki main base on the planet Mars was evaporated along with the rest of the planet. However the Anunnaki defeated the Draconians and exiled them all out of the galaxy forever.

The Anunnaki decided to take over the Earth and they genetically modified human DNA from their own and made us the way we are today. The Anunnaki built cities and structures, but decided not to stay in touch with our planet or race because they didn’t want us to turn out like the Draconians did.

The witness woke up in his bed in the morning and assumed it was a dream and still does to this day.