UFO Photographed over the Giza Pyramids 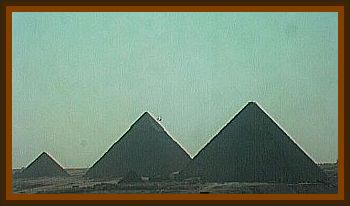 The object is highly reflective and presents a clear structure. It is difficult to determine if it faces, or is positioned behind, the pyramid.

Despite the fact that the object has a circular shape in the main photo, it has an oblong shape in the image taken 47 seconds earlier.

Balloon, airplane, kite, insect. If we make a more detailed observation, it appears like a different object.