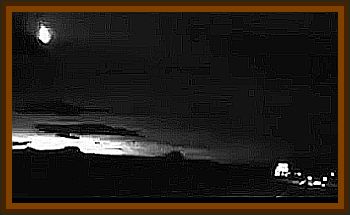 Rene Gilham would notice a strange light in the sky from his farm home. When he went outside to investigate he could see the light was a brightly luminous object, approximately 40' across and at a distance of around 1,000' from the ground. As he watched this glowing object, he noticed something beam out from underneath that bathed his farm with an penetrating light.

Gilham remained motionless watching the object for ten minutes. At one point, a smaller craft appeared and hovered alongside the much larger object. Then, the larger object suddenly went straight up and headed west. At the same time, the light increased in intensity. And a whirring noise like a high speed electric motor gaining revolutions was audible.

The sighting was also witnessed, in part, by Gilham's wife, children, and his father in law.

The following day, however, Rene began to experience intense itching of his face. It also became increasingly red, as if he was severely sunburnt. The pain would eventually become so intense that he would seek medical attention. Investigation would suggest that the rash was not a response to something such as poison ivy or an allergic reaction.

According to Dr. Joseph Drake, the reddening was similar to burns that are inflicted on the face and eyes when working near an arc welder without a face mask.

The condition would continue to worsen, and he was eventually admitted to Mary Sherman Hospital. By this time, rumors were circulating with briskness. And reporters would loiter at the reception of the hospital, eager to speak with staff or family members about Rene's condition.

Perhaps strangely, the case would suddenly disappear from public view. As would Rene himself. Nothing much is on record following the declaration on November 11th that his condition had improved. And that he was to be released from hospital the following day. Where he went, or if he even left the facility, is still open to debate.