While Standing at GI Corner 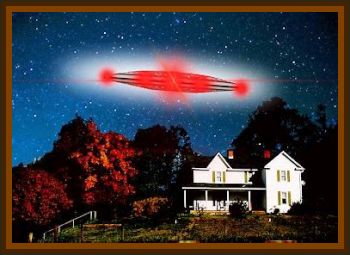 In 1968, while standing at GI, corner a cigar shaped craft moved above me at a speed as that of a Zepplin.

It had colored lights along the base line of the ship and portals halfway up.

It flew about 500' above me making no sound.

the sky this night was moonless and overcast the ship clearly luminated the foreground.

This was in Minot, ND while stationed at Minot AFB.

I'm out of the military so i can speak now.

While on assignment on the missle silos during the winter 1968 I had been working at the sites doing repairs.

We stayed over night at the Oscar LCF.

About 6:00 p.m. the missle security team was sent to Oscar6 silo, they arrived and the whole missle site was openned up.

At this point they checked the area and resecured, they closed the site and started back towards the LCF.

As they drove down the road the sky light up and a UFO chased their vechicle ¼ mile behind the 6 pack truck then it disappeared into the sky. After seeing the UFO things that plauged the nuclear carrier fdr I can understand why a nuclear site would be opened up.

By the way, I was there when this happened.

So how many more have we never heard of, the no tell security aspect.

I saw Richard Hoglands monuments of Mars and that the Russians had a UFO destroy their satellite.

Now here is what no one has thought of so here we go.

We can not see space from Earth very well, the Hubble telescope has taken some great pictures.

How does the transmission give a video feed? NASA has covered up vital information. How much information have they gotton showing UFO transportation going to other planets in any part of the universe.

Martin Short from Canada made a comment on the tape he made about UFOs, he said you will not know they are there unless they slow down to look at something.

On July 10, 2005 a UFO was seen in Winston/Salem NC and recorded on the hospital cameras. I had to slow the digital video to view the craft.

They are here and flying so fast that is like us watching the scan on a TV, so fast 2 lines 525 total in 1/30th of a second don't blink.

Hey they are moving faster than this, and they are magicians of the skies.

I think watching the skies with telescopes and video and using a digital recorder that can go to 1/15 of a second scan or less to bring them to a stop.

I was trying to reach Richard Hogland with this idea. You need someone who has resources to go forward and try to see the truth.

The goverment has covered up so much. All I have to say is what we the American people not seen is quite obvious. I think if we try to find out our blip will leave the radar if you know what I mean.

Like the X Files say, the truth is out there.