Craft And Tall Being Observed 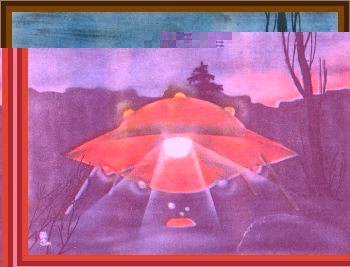 Five people were in a nocturnal hunting party just east of the Guadiamar River in the area between the towns of Gerena, Aznalcollar, and Olivares, in the province of Seville, southwestern Spain. The place is part of the estate La Pizana, 2 miles southwest of Gerena. Its principal characteristics are low hills with some farming, clumps of eucalyptus trees, vegetation located especially near the Guadiamar River, the remains of a Roman aqueduct, and beef cattle. The place where the incident occurred is a very dense grove, primarily of eucalyptus trees, with some open areas inside.

They each had a six-battery flashlight. The night was dark, with no wind, good visibility, normal temperature, under a rather cloudy sky. One of the group decided to return to the car, he saw nothing of what subsequently happened. The other 4 went into the thick grove, after having waded across the stream. It was about 3:30 a.m. of the 25th. They had been there several hours already, and, using their powerful flashlights, continued looking for their prey between the trees, following a road made by tractors.

Manuel Gordillo told the investigators that while still on the other side of the river, he alerted others attention to what he thought were the red lights of the back of a car. A Gypsy who was with them, and could not be interviewed, said, according to Gordillo:

Gordillo said that the hunters were seeing these red lights on the ground in the distance, they put out the flashlights and approached. The closer they got, the more light was seen, and then he thought that it was not a car, if it were, it would be going away from them but instead they approached, the lights were more and more visible and still they could not see the drivers, they then went off the track a little, crossed the river to the other side, where the light was. They began to hunt and forgot what they had seen, enthusiastic about the hunting.

At one point, Gordillo was then practically alone, without hearing of the others. He shone the light here and there and didn't see anyone, turned off his flashlight and whistled for them to answer. Then they turned on their flashlights and came to him quickly and asked:

Hey, didn't you see that again?

He hadn't, so they told him that there was really was a light there, and when he proposed to go closer check the light, they were very scared. They saw the red light, it was doing a strange shaking. Gordillo asked them to watch his back, as he was going to get a little closer. Francisco Lopez Rivero, wanted to approach with him, the pair went on ahead of the other two. As they neared the place where the red light was, they saw that it was not just a single light, but a row of lights, and there was a person or something walking around it. Gordillo said he was now within 100' of the lights.

Lopez Rivero remained a little behind Gordillo, observed the scene in a similar manner, and told that the object seemed to him like a large earthen jar, upside down, with a red light on top, stationary. Toward the center of the object he saw several rows of lights of different colors, green, orange, red, & yellow. Gordillo could not see everything, because of the vegetation, and he could not see how tall the being was, he saw only the legs but he saw that these legs were very big.

The light was behind the being, and he could not make out well what he was wearing. It seemed to him that the being was wearing shoes or boots, and he was speaking, in a voice that sounded as if he was in a deep well, with sounds like Mnn, mmm. The steps the being took were slow, he came toward the two men, approaching up to 30', was lost of sight.

Lopez also observed the beings legs, indicated they were bright-colored, silvery. He had the impression that at the height of the mans eyes and mouth, there was a window, like on a motorcyclists helmet. He too only saw the figure to the waist, and did not see the arms and the waist. The helmet was black or dark, and the rest of the body silvery. As to the sounds emitted by the being, as well as his movements, he agrees with Gordillo. Lopez specified that the being seemed to be a very strong and tall being, 7' or more. Gordillo explained that he was a little afraid then and thought of his wife and children, and started to feel very unsafe.

The object seemed round to Gordillo, and it was near the ground. The lights were low, at about 10' high, and must have been about 15' across. They were of different colors. The being went back to the lights, then approached again and grabbed something. Then, Gordillo saw him either go into or behind the object with the lights, he didn't see any door in the object.

Gordillo said that finally, they got out of there, running, very scared. They no longer felt like hunting. As the ran, he fell, and the others fell on top of me.

On Sunday, January 14, 1979, the investigators went to the site of the supposed landing with Francisco Lopez. After certain difficulties in finding the spot where his observation was made, they carefully studied the ground and observed the following:

The area is very wooded, and it is not easy to see. Nevertheless, the exact place where it is supposed that the object landed is a rather circular area, where the trees themselves are situated in this curious geometric pattern. The land was relatively soft, due to the rains that had fallen since November. They found no sign of traces except for a curious footprint, which seemed to have been impressed into the ground many days before. After carefully drawing the mark, they measured it, and its size was 16½". Several feet farther on they found two more marks, made in the soil, and they were the same size as the first. The appropriate experiments showed the mark, in proportion to the height, would correspond to an individual some 6'11" tall. The distance between the marks was about 43'.