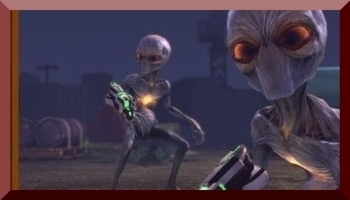 Late one August evening in 1914, a man and woman, their three small children, and three young American men crouched behind rocks and brush along the banks of Lake Ontario at Georgia Bay, Canada, and watched a weird scene:

A strange globular craft, which appeared to be about 15' in diameter, rested on the surface of the water about 450' from shore. On the square shaped substructure at the water line were two small men like creatures who were busying themselves with a green hose. The little men worked quickly, and seemed to be having some problem with kinks in the hose, by the way they manipulated it.

At about 5:00 p.m. one of the children spotted a deer at the water line staring out over the lake, apparently unaware of the humans nearby. When the girl glanced in the direction the deer was looking, she saw an unusual craft resting on the water. She called her mother, who when she saw it, called her husband and the three young Americans.

William J. Kiehl says the air was very still, the water was unruffled and the craft sat motionless in the water about 450' from shore. Its shape was that of a globe except that it was slightly flattened on top and had some sort of a square substructure around the bottom.

Two little fellows were on this deck like substructure, and appeared to be busy with a hose which looked to be about 2½" in diameter. The hose was green and on the end of it was a round object.

When Kiehl first noticed the little men, they were working vigorously with the lower part of the hose, the other end of which came out of the globular structure above their heads. Their motion indicated that they were taking the kinks out of the lower part or untangling it in some way.

Questions later put to Mr. Kiehl about the small men he observed yielded the following information:

They appeared to be 4' tall or less, were dressed in tight fitting suits which revealed their human shapes, and which appeared iridescent, for they were green or purple as they moved about in the late afternoon sunlight. Each of the men wore a box shaped or square yellow headpiece.

While the little men were concerning themselves with the hose, which appeared to be controlled by something in the upper part of the globular structure, 3 pipes or straight objects came out of the top of the craft, along with the heads and shoulders of 3 other small creatures. These three began doing something to the pipe like protuberances. Kiehl could not discern what the 3 were doing, but noted that while they, like the other 3, were wearing square yellow headgear, their clothing what could be seen, was khaki colored.

He also noted that the size of the heads was large in comparison to the diminutive bodies. Kiehl described the bodies as skinny.

When the trio of little men on top of the craft finished their task with the pipes, they turned and seemed to look very piercingly at the deer which was watching them from the beach. The deer turned and ran back into the woods. They seemed not to notice their human audience, as far as Kiehl was able to tell.

The 3 topside men then disappeared into the craft and the pipes went down in the same manner.

At this point, the creatures on the substructure had gotten the hose in through a square hatch above them and about midpoint of the craft itself, and one started to get into the hatch. Kiehl could see into the hatch, and noted what seemed to him to be tiles set in the opposite wall which were bright green in color.

Just as the first little man got into the hatch, the craft began to lift off the water. Water streamed from the bottom of the craft and the remaining little man clung desperately to a chrome like ring which encircled the globular superstructure. The craft lifted straight up to an altitude of about 15' and Kiehl could see the underside which looked like a latticework of square metal, dull gray in color like the rest of the craft, and which shed water.

Then the whole globe tipped back at a sharp angle and shot off into the sky at an angle of about 30° to 45°. It left a short trail of vapor or steam which was only a few feet long, and the object was quickly out of sight. It made no sound at any time which Kiehl could distinguish.

The last that William Kiehl saw of the craft, the little man who had been left clinging to the rail around the middle of the globe was still holding on. Kiehl says he often wonders what happened to him.

Investigator asked Mr. Kiehl what was said about the incident by his companions, and Kiehl replied:

They were all startled at the incident, but talked little about it afterward. For one thing, there was a language problem. The Canadian family spoke only French and the young college student was the only interpreter and his French apparently was not the best.

The machine was watched by the group of 8 people for about ten minutes, affording everyone a good look.