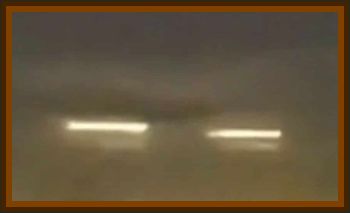 Two cigar shaped UFOs that appeared to be connected by a tiny tubular connection were spotted by a Georgian witness at Canton.

The witness first seen the 2 attached mysterious objects while he was outside on the driveway and about to go inside.

He looked to his right facing southeast to check if his horses were in their stalls when he noticed something strange flying over the barn. He described the sky as clear and not cloudy. The sky was still in a broad daylight when the witness saw the UFOs.

The witness further described the movement of the objects. He said they were flying in a strange manner, not similar to any other aircraft he already seen in his entire life.

According to the description of the witness, the 2 become 1 object was glowing brightly without wings and appeared like 2 silver cigar shapes connected by a small tubular connection.

Judging from the distance, the observer thinks the object was smaller than a commercial aircraft and about the size of a private airplane. The witness first thought the craft was ascending, but also appeared hovering and moving slowly at first.

The witness managed to take a cell phone photograph of the UFO when it appeared above his house, but the object was gone moments later.

He said that the object was either out of sight or disappeared and left him with an unsettled feeling. The report by the witness was filed on November 13, 2014, which included one image of the UFO.