UFO Crash At Military Base 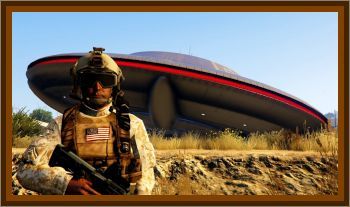 Jane M. Doe served in a key civilian capacity in one of the two armed forces, made the following statement: In a location described only as somewhere north of Georgia, a UFO crashed right on the grounds of a US military base, causing considerable damage to both the base and the craft. Described as generally round in shape, the craft was 15' wide and 10' high, divided into three main sections: a control room, a compartment with four seats and a bottom bay equipped with a trap door exit. In the control section was one large window and a number of smaller windows around the sides. The craft was silver in color with markings on the inside as well as the outside.

There was also crew members.

Facial features were generalized; the eyes large and black like bug eyes, ears were small, lips thin slits. The fingers, numbering five, were long, bony, the feet flat, about size 6 with ½" bony toes.

The female had small breast and, according to the source, the race could reproduce but there was no hint as to their genitalia, they had teeth, very white, wide and short. A respected UFO researcher would bring the account to the public in a book he authored. According to research, the story was given to him by Jane M. Doe, a mother of one of the military personnel at the base, and civilian employee. Although there have been several secondhand witness statements in relation to this account, no other firsthand accounts have come to light.