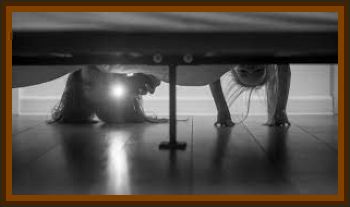 As a child growing up in Southside Chicago, I shared a bedroom with my younger brother.

We had bunk beds and I slept on the top bunk. My little brother would talk to his imaginary friend, Georgie, when playing in our room alone but I never thought much of it.

We had a small desk in the room, the kind with the chair attached across from our bunks and against the far wall.

One night, I awoke to a noise.

It was common for my brother to fall out of his bunk and onto the floor. I looked over and instead of my brothers sleeping body I saw a shadow in the shape of a small child.

The shadow was sitting at the chair/desk combo and the shadow head turned towards me as I was leaning over the edge of the bunk bed.

I covered my head and prayed and prayed that it would go away. When I glanced back out it was gone.

A few days later, I peered over the edge of my bed awoke again by a sound. I saw my brother half on and half off his bunk, sound asleep.

I went to lay back down and saw the same shadow child crawling across the ceiling on the far side of the room.

Being on the top bunk and very close to the ceiling, I produced a short, small scream. The head of the shadow child turned toward me and started to turn towards me.

I must have fallen back asleep as I don’t remember peeking out later.

Now, my brother will tell you that Georgie was real and he was his friend.

My older brother will tell you and feeling a presence in that house and of someone tapping him when he was studying late a night.

Was it a dream caused by stories, or did I truly see the ghost of a going child?

I believe I saw him.