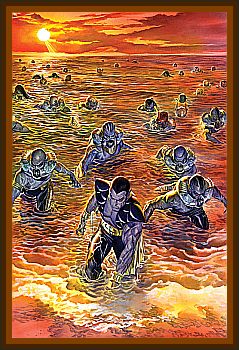 Locals reportedly saw a bizarre creature emerging from sea right off the coast.

It was described as a human shaped figure covered in scales and with what appeared to be snakes protruding from its hands.

Canon fire was directed towards the creature without any apparent effect.

Around the same time off the coast of Nice in France, fishermen saw an object that descended towards the sea, a blood like substance was seen to drop from the object.

Others saw 3 vessels moving at high speed above the city. The vessels then approach the local fortress and descend to the water causing a great boiling of the sea and emitting ochre red vapor.

To the great stupor of those present, 2 humanoid beings, with large heads and large luminous eyes dressed in red scaly combination outfits emerge from the vessels. These humanoids appeared to be connected to their vessels by long tubes. The humanoids spent several hours involved in strange work around their vessels. Meanwhile soldiers in the fortress shot cannon at the intruders without any apparent effect.