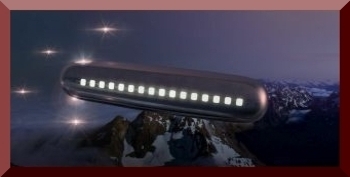 In roughly the winter of 1998/1999, An individual was driving out of Lake Geneva, WI on HWY 50, towards Kenosha. When he noticed a long craft, that was a straight line with a bright white light on each end and one in the middle. He didn't give it much attention at first, but did continue looking at it because it didn't resemble a plane in shape, and the lights looked different.

He began to really pay attention when he turned off HWY 50 onto the side road that lead to his subdivision. The craft was originally headed parallel to the highway traveling in the direction towards Kenosha and away from Lake Geneva as was the individual, but when he turned 90° onto the side road, the craft changed direction 90° as well. He took note because aircraft don't turn like that.

The aircraft seemed to follow me change in direction, and to be descending to lower altitudes and getting closer. He remembers slowing down to basically a crawl in his vehicle to watch the craft, and as crazy as this may sound, the next thing he remembered was standing outside my car, behind the rear bumper, driver's side door was open, no recollection of getting out of the car, and now the large ship he had seen before is gone and there is a much smaller triangle sized ship hovering maybe 20' at most over the road and maybe 20' away horizontally. It was completely silent, a white light on each corner of the triangle and an orange or yellow light. It's been 16 years, and hard to remember everything. He freaked out and jumped in the car and took up as fast as possible. Looking back in the rear and side view mirrors, the triangle craft was gone, but the large cigar type crafted previously viewed but was nowhere in sight while observing the triangle craft, was on back up in the sky and was again traveling parallel to his car.

He ran inside as fast as possible. Upon entering the house, He looked out every window, in each direction and saw neither ship. He then proceeded to write down the entire event, and (eventually) fell asleep.

The following morning his girlfriend stopped by before school as she typically did and he excitedly started to tell her of the previous nights event. She asked him to calm down and that he had been dreaming...reminding him that he had just woken up. He told her that he wasn't dreaming it, and to look on my dresser where it was all written down.

That was that until maybe 6 months later he was in Kenosha at a friends house. The friend was late returning and he began to worry about him and was looking out the friends back door towards the main road anxiously awaiting his return. That is when he ( The witness ) noticed a small triangle craft, exactly like the one he had seen before, hovering maybe 20' off of the ground, not making a sound, and coming slowly, very slowly, towards the house. It flew across the back yard straight towards him and he called another woman there, to come look and she too saw it in amazement. They watched it for a few minutes as it slowly approached the house, flew over it barely over the rooftop and proceeded across the street. Upon being directly over the house across the street, it changed direction 90°, and slowly hovered over all the houses on the opposite side of the street until it was out of sight.