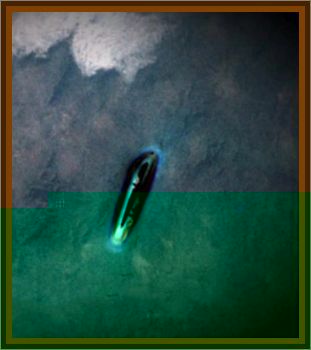 Major James McDivitt saw, filmed, and photographed an object, which approached the Gemini IV capsule in which they were orbiting the Earth, passing over Hawaii. The UFO had a long arm sticking out of it.

The following is what Major James McDivitt repeated many times:

I was flying with Ed White. He was sleeping at the time so I don't have anybody to verify my story.

We were drifting in space with the control engines shut down and all the instrumentation off when suddenly an object appeared in the window.

It had a very definite shape: a cylindrical object, it was white, it had a long arm that stuck out on the side.

I don't know whether it was a very small object up close or a very large object a long ways away. There was nothing to judge by. I really don't know how big it was. We had two cameras that were just floating in the spacecraft at the time, so I grabbed one and took a picture of it, and grabbed the other and took a picture.

I Then turned on the rocket control systems because I was afraid we might hit it. At the time we were drifting, without checking I have no idea which way we were going, but as we drifted up a little farther the sun shone on the window of the spacecraft. The windshield was dirty, just like in an automobile, you can't see through it. So I had the rocket control engines going again and moved the spacecraft so that the window was in darkness again, the object was gone.

I called down later and told them what had happened and they went back and checked their records of other space debris that was flying around but we were never able to identify what it could have been. The film was sent back to NASA and reviewed by some NASA film technicians. One of them selected what he thought was what we talked about, at least before I had a chance to review it. It was not the picture, it was a picture of a sun reflection on the window.

The Condon Report, is considered by almost all ufologists and by several scientists who participated to it as a deliberate attempt to debunk the UFO phenomenon, did validate the McDivitt UFO sighting and several other astronaut sightings:

There are three visual sightings made by the astronauts while in orbit which, in the judgment of the writer, have not been adequately explained. These are:

1. Gemini 4, astronaut McDivitt. Observation of a cylindrical object with a protuberance.

2. Gemini 4, astronaut McDivitt. Observation of a moving bright light at a higher level than the Gemini spacecraft.

3. Gemini 7, astronaut Borman saw what he described as a bogey flying in formation with the spacecraft.

Visual sightings made by the astronauts while in orbit which, in the judgment of the writer, have not been adequately explained, Unexplained sightings which have been gleaned from a great mass of reports are a challenge to the analyst. Especially puzzling is Especially puzzling is the first one, of an object showing details such as arms protruding from a body having a noticeable angular extension. If the NORAD listing of objects near the GT-4 spacecraft at the time of the sighting is complete as it presumably is, we shall have to find a rational explanation or, alternatively, keep it on our list of unidentifieds.

I never made a big deal out of it. It was something I definitely couldn't identify. I reported it to the ground, Ed was asleep and we were rotating at a pretty high rate in drifting flight. The windows were dirty, I recall, All of a sudden there was this white object out there. It looked like a beer can with a pencil sticking out of it at an angle. It had a definite cylinder shape, about three times as long as its diameter.

Maloney adds that the astronaut estimated that he got a 30 second look at the object. Furthermore, McDivitt said, the space agency made no attempt to prevent his telling his UFO story.

A NORAD officer later handed to the well known debunker Klass, a print of the Titan II second stage. This, he told Klass, was what McDivitt had seen but was unable to identify, it was the Titan booster.

Klass obtained a copy of the photo from NORAD and sent it to McDivitt, asking if it did not closely correspond to his verbal description of the UFO he had seen.

Thank you for sending me the slide of the Gemini IV photograph. I very quickly identified the object in the photograph as the second stage of the Titan rocket which launched us. I am sure that this is not a photograph of the object which I described many times and which many people refer to as the Gemini IV UFO.

McDivitt did not see any special importance in what he saw. He did not file any UFO report, he also always insisted that it was not the Titan II booster. He also never gave an opinion about the nature of what he saw. Some researchers rightfully noted that the astronauts eyesight was affected by the long exposition to the oxygen saturated atmosphere in the Gemini capsule. Some ufo promoters did exaggerate the story. But debunkers did understimate it also on occasion. Almost everyone agrees that it could not have been a human satellite, such as a secret US satellite or a Russian craft.