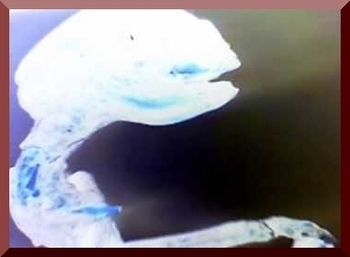 The story says that on January 21 or February 21, 1959, in the night, or a few days before this date, dockers of the harbor of Gdynia in Poland saw a radiant object fall in the middle of the harbor basin.

Their description was so precise that the place where it fell could be located exactly, and the maritime authorities sent three divers who entered in the waters loaded with ice floes. They initially reported that their search is obstructed by a thick cloud of mud, but they finally came out all the same with a metallic part.

The newspapers claimed that this metallic part had no trace of rust and that it implies that it might belong to the initial meteoritic object.

The Polish Navy Polonaise made a preliminary examination of the piece, then it was sent to the Polytechnic University of Gdynia.

Several days after the fall of the radiant object, men in charge of guarding the surrounding beaches stumbled at midday on a strange silhouette, a kind of man or male being, 5' 3" tall, who dragged himself, completely exhausted, on the sand.

The creature did not speak any known language and was dressed of a kind of uniform. Part of his face and hair appeared burned. He was taken along to the hospital of the University where he was isolated and examined. But it quickly appeared impossible to strip this creature off his uniform because it did not have any means of opening, it was not made of a usual stuff such as wool or fabric but of a metallic or resistant stuff which could be cut only with special tools and much efforts.

The doctors noted that his body organs were very different from of ours: the circulatory system was very new to them as it was in spiral and the number of fingers and toes was six per member instead of five.

This creature stayed alive until a kind of arm band was removed. The body was then sent in a frozen container towards the USSR to an underground bunker of the area of Moscow of for further examination.

Thereafter it was said that it was not one, but two extraterrestrial bodies which were recovered on the shore on this occasion. While the first had died, the 2nd stayed alive for a long time, and it did not die but fell into a coma after the doctors at the hospital of Gdynia-Redlow, withdrew an arm band or a bracelet off his arm.

As it was in a coma it would not have been sent frozen in Moscow but put into a special room intended to support its vital functions in a secret place in Poland, which was not very secret since it is said to be an underground bunker under a building of the center of biomedical services in the east of Solnechnogorsk, where it would be stored with other bodies of extraterrestrial beings.

Polish ufologists quickly established the link between the object which had fallen and the creature, as one Polish ufologist put it, adding suggestions that whole or part of the affair could be or is only a baseless rumor. But no investigation seems to give the least precise information in a direction or another, the story seeming to have appeared in newspapers then apparently reported by Polish ufologists, Anton Anfalov, Lenura Azizova, Larissa Chora, and Bronislaw Rzepecki.