Alien Killed With a Coal Shovel 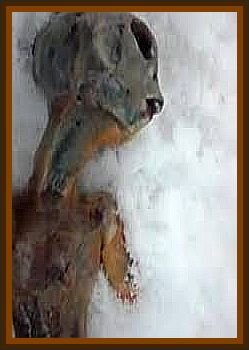 Stories of alien abductions peaked in the 1960s and 1970s, but one case that predates them is said to have taken place in the northeast.

It is a sunny spring day in 1940. Soldiers are marching south along Saltwell Road, in Gateshead, towards Low Fell. Nearby, 5 year old Robert Hall is playing with his friends in the maze of red brick Tyneside terraces, not far from the train tracks.

They weren’t bloody green, they were grey. I will take it to my grave.

Earlier in the day, he had seen something whizzing about in the sky and, after he tired of playing with his friends, he decided to go to his Hedley Street home around the corner.

Robert, a retired window cleaner, says he was confronted by an aircraft the like of which he had never seen before. He described it as a big egg shaped thing surround by bright light.

Robert says it was then that he spotted strange looking creatures standing in the back lane. He says 3 of them were built like men, but ranged from 2' to 4' in height, one looked like Big Foot while another had long flowing hair and a coat that partially covered a skeletal body and bat wings.

Other children were petrified and in shock. They were trying to get over the railway, but there was barbed wire and they were getting cut and were screaming, Robert says.

The story sounds like something from a low budget sci fi film but the man telling it is no attention seeking youngster. Robert Hall is 76 and he has been telling the same story all his life.

And now he is telling it in a television programme that has brought his story to a worldwide audience.

Recalling what happened, Robert says the creatures spoke to him in perfect English, with no accent, and asked if they could examine him.

They took blood out of the back of my neck and put some jelly on. I kept my eyes shut. I was so frightened I was shaking.

After 20 terrifying minutes, he was allowed to go.

I was up that street like a shot, he says. My parents thought I was kidding and so did the soldiers.

The next day, Robert says, 2 men with black suits came to the house and warned him that if he said anything, he would disappear.

One close encounter would be fascinating enough, but the pensioner says things took an even more sinister turn a few days later when an alien tried to snatch him off the street.

He says a grey alien, fitting the common description of an extra terrestrial with big eyes and a large head, grabbed him.

He was on me in a couple of seconds, I fell over the kerb and bashed my toe. My Uncle Ernie saw what was happening and bashed its head in with a coal shovel, said Richard.

The alien’s body was allegedly put in a coal sack and Robert was sent to find a local policeman, Sergeant Brookes. He says the Army was called and took the body to a church.

Robert says strange small triangular marks appeared on his left cheek, which remained until he was about 12 or 13, before disappearing, leaving no trace.

70 years after his alleged close encounter, Robert’s story has become the subject of a television documentary.

Researcher and broadcaster Richard Hall, who is not related to Robert, studies all things out of the ordinary for his digital television program, The Rich Planet Starship. In 2008, he was giving a lecture on UFOs at the Caedmon Hall, in Gateshead, when he was contacted by Robert, who lived nearby.

Richard, who is 43 and lives in Sunniside, but is based in Consett, says:

It is a fascinating story and it is a very, very early case in terms of modern day grey alien abductions.

There is a case of a recovered UFO in Missouri where small alien creatures were allegedly recovered and, obviously, we have got Roswell in 1947,an alien spacecraft allegedly crashed at Roswell, in NM.

But this predates all of that, which makes it a very interesting case.

Richard carried out a 3 month investigation into Robert’s claims. He verified that street and shop names checked out. He also managed to confirm there was a Sgt. Brookes working the area at the time.

Richard says Robert’s description of the creatures, the small stature, the grey skin, the large eyes, the craft itself, elliptical shape and the metallic surface with the bright light, are common features of alien abduction stories.

There’s also the fact that they tried to interfere with Robert’s neck.

“I don’t believe that they took blood, as Robert claims, he says. They were possibly trying to put something in.

Interestingly, Robert says the creatures had a short, white hand held device which could subdue or immobilise somebody and there’s the triangular marks that were left on his face.

These are all things that we find in abductee cases, again and again.

Richard’s investigations are ongoing and he is keen for anyone who can back up Robert’s claims to get in touch with him.

Robert, who has 4 children and 3 grandchildren, is sincere and earnest about his alien encounter all those years ago.

Richard, who has met Robert’s sister, says it is a story he has stuck to since he was a little lad. Robert says:

I got the piss taken out of me for years, and at school the teacher would say:

There’s the boy who believes in little green men.

They weren’t bloody green, they were grey. I will take it to my grave.