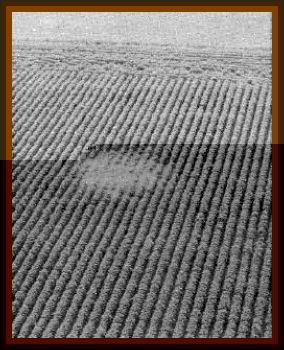 Pat Barr and her 17 year old cousin Kathy Mahr were preparing for bed in the upstairs bedroom at the Barr farm home, 7.2 miles south of Garrison, Iowa.

Pat’s attention was caught by the sound of what seemed to be a low flying jet and she went to the North window and looked out in the direction of a neighboring farm. She called to her cousin and both girls watched a strange object which appeared to be hovering over a large bean field on the Barr farm, Kathy’s description is as follows:

The object had a dull metallic finish which was easily discerned because of the 2 rows of lights that were arranged across the face of it at the midline. It appeared like 2 coffee saucers placed rim to rim and rotated as it hovered.

The sighting lasted for only a few seconds, after which the object left at such high speed that the girls did not know precisely which direction it went, except that it went past their window.

The area where it had hovered was glowing red after the object disappeared from sight. Neither of the girls was frightened but were curious about the strange appearing craft.

At breakfast the next day the girls told the Barrs about what they had seen and Mr. Barr tended to be skeptical and attributed the whole thing to a figment of their imagination. However, Later that morning he discovered, at the spot indicated by the girls, a nearly circular patch of ground in his bean field which was almost bare. The bean vines appeared to have been burned although there was no evidence of flame.

The area in the field which was burned is approximately 40' in diameter and was easily seen from the air. The local news media showed interest in the incident and a taped interview with the Barr girl’s which was played on a local radio station. Most of the residents seemed inclined to attribute the spot to a fireball or lightning.

Mr. Barr does not rule out lightning entirety, and when interviewed said that he hadn’t informed authorities at first because he was skeptical. Pat Barr stated that she was convinced that the object she had seen had caused the damage to the bean crop and that it was an air flying object from outer space.

It wasn’t anything Earthly, she said.

Mr. Barr told interviewers that he “would hesitate to guess, at the object’s identity and the cause of the scar on the field, but did say that he felt it was something unusual, I’ll put it that way.

Samples of the bean vines from inside the circle, near the outside, and from elsewhere in the field were gathered by Mcwane and are now being examined by an APRO consultant.

As in the past, there is a likelihood that the bean vines will furnish a clue to what happened, but the tests must be made anyway. Tests for radiation at the site revealed nothing abnormal, and similar tests of the vine samples were also negative.