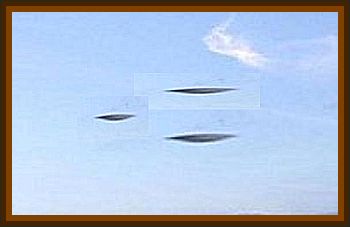 Major Russell J. Gardinier observed three pancake shaped objects approximately 20' to 30' across constantly quivering and oscillating in the air. The objects were capable of abrupt changes of direction and speed, yet also could hang motionless in the air.

The objects were a metallic bronze color. No sound was heard from the objects. Mrs. Gardinier & Mrs. Lowell Allen, observed the third object as it climbed and disappeared toward Fairchild AFB. The objects first appeared from the northwest until they were abreast of the northwest corner of Spokane, orbiting there for approximately 5 minutes then they headed southwest towards Fairchild AFB.

At 10:00 p.m. Capt. & Mrs. Fortney while driving on Highway 2 near Fairchild AFB, observed a bluish white light approaching their car at a high rate of speed. The light passed over the car and proceeded on a southwest course overflying the hangers areas and runways of FAFB.