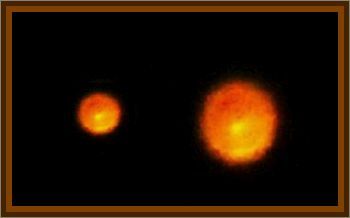 At 7:00 p.m., prominent politician Miguel Angel Garcia was spending time with his family at their home in the city of Mayaguez, commanding a view of the city and its bay from a considerable elevation. García, his wife, daughter and son-in-law interrupted their conversation to look at two orange disks, one larger than the other, flying high over the Mona Passage. The politician promptly went inside for his field glasses and returned to study the unusual objects. The larger of the disks had the apparent size of the sun, according to Garcia, and was static while the smaller one maneuvered around, switching positions with each other.

García's daughter Fredita managed to photograph the strange aerial ballet between the orange disks but nothing appeared on the film due to shortcomings in the Verichrome film employed.

Other residents of Mayaguez also saw the disks, but believed them to be military devices undergoing flight tests out of Ramey AFB, in an age of technical wonders, it seemed like a perfectly reasonable possibility.