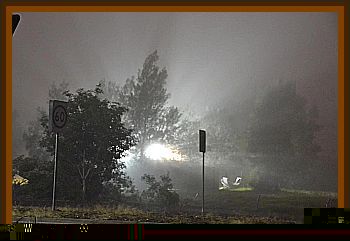 Country Victoria might not scream hidden mysteries of our age, but consider this:

Since the late 30s and beyond, the region around Mt Gambier has copped a significant share of alleged UFOs.

Take the February 18, 1969 edition of the Mt. Gambier Border Watch:

It lit up Mr. Bruce Millowick's pig houses like a spotlight, reported one eyewitness, describing eerie red and green lights flashing in the skies over their rural neighbourhood.

It was but one of countless cases reported that week, with others being chased along the Princess Highway by intense bright lights.

While working in the yard at the Commonwealth Railways workshop February 5, 1947 Mr. Ron Ellis and two workmates claim to have seen five strange objects in formation pass across the sky from north to south.

The objects were white or light pink and shaped like an egg. Mr. Ellis said that he could not give an accurate estimate of the size of the objects, but they were casting shadows and judging by his experience with aircraft in the RAAF during the war he considered they were about the size of a locomotive.

Although the objects kept on a direct course at a height of about 6000' they appeared to be quivering he said.

Owing to their great speed they were out of sight within a few seconds.

Any question of the phenomenon being an optical illusion was dispelled by the fact that a few minutes later both Mr. Ellis and his companion gave an identical description of what they had seen.

Their description was verified by another member of the workshop who said he had also seen the objects.

A follow up article on February 8, 1947 in the Advertiser was titled:

Commenting yesterday on a report from Port Augusta that several men working in the yard at the Commonwealth Railways Workshops at about 9:00 a.m. had seen five strange egg shaped objects in formation pass across the sky at a height of about 6000', the Government Astronomer Mr. G F Dodwell said that the phenomenon did not fit in with anything astronomical and was a complete mystery to him.

Mr. Dodwell discounted the probability of the objects being meteorites. He said that meteorites being so small and travelling at such high speeds did not cast shadows whereas the report stated that the objects had cast shadows about the size of a locomotive.

The presence of falling meteorites would have been accompanied by a deafening roar.