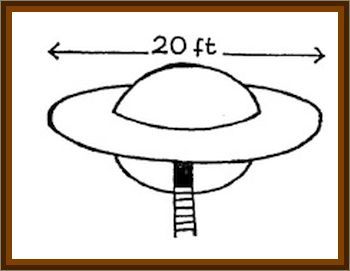 Two police officers, C Hutchins & A Huskey, were driving in an outlying section of Gaffney known as the West Buford Street Extension when as they neared a right angle bend in the road, saw a round, glowing object with a wide, flat rim around the center resting on the ground.

He described it as being spherical, like a ball, with a wide, flat rim around it. There were no lights or portholes visible on it. It was completely dark, reflecting a dull gold color in the headlights of the police car. The car did not stall. As the object settled to within a few feet of the ground, both men got out out of their car in a state of benumbed amazement.

Later Hutchins estimated that the object must have been about 20' in diameter.

A small door suddenly opened noiselessly on the underside of the sphere, he said, and a short ladder, 4' to 6' long, dropped down. White light poured out of the opening, but neither officer could see anything in the interior.

A figure appeared in the doorway, descended the ladder, and walked slowly and deliberately toward the two police officers. When the figure reached a point about 15' to 20' from the two, it stopped.

He didn’t move stiffly, officer Hutchins said. He moved just like anybody else, but kind of slow, like he was taking his time. He wasn’t scared of us or anything like that.

In appearance, the humanoid was about the size of a 12 year old boy, maybe 4' tall. He wore no helmet or headgear and was dressed in a gold suit with no buttons or zippers. His costume was shiny, like metal, in the reflection of the headlights, it was not self luminous.

The humanoid asked numerous questions and ignored the witnesses when they asked any questions. Hutchins could not remember seeing the feet of the creature. It was standing on high grass and the feet must have been hidden.

Both men could not really remember the full context of the conversation. Hutchins claimed the alien spoke perfect English, Didn’t have any accent or anything. He acted like he knew exactly what he was saying and doing…didn’t make any quick moves or false moves. He just stood there and talked to the officers.

He wanted to know why both me were dressed alike. His speech was very precise. He pronounced each work very carefully. When asked where he was from he just laughed.

The meeting was brief, perhaps only 2 or 3 minutes.

Then, Hutchins say, the creature announced: I will return in 2 days.

He turned, walked slowly back to the ladder and climbed into the object. The door closed quietly and the craft began to whirl, a soft whirling sound, like an engine with a muffler on it. The object rose slowly and vanished into the sky.

A local councilman found numerous footprints at the site where the little man had stood. There was no return visit by the alien.