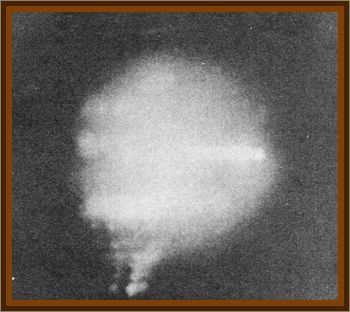 I was 14 years old then, arriving on the island of Puerto Rico from Connecticut with my parents; we had a house in San Juan which we rented, and needed yearly maintenance. I heard a lot of talk on the radio, and through local word of mouth about unusual sightings in the skies all over the island.

I often climbed roofs where on two clear nights I saw several fuzzy circles flying over the city near the airports, there are two airports in the city, one military, the other a civilian international airport. These objects were flying very slowly, and seemed to reflect the city lights, having no lights of their own.

On another day, in our backyard, I saw two dark gray oval objects in the distance, on the flight path of commercial airliners, our house is directly on that path. These objects were slightly oval, dark gray, and made no sound.

Being aware that these might be UFOs I made a point to observe them carefully as they flew almost directly overhead. They flew slightly askew from each other, as in formation, keeping a perfectly straight course northward, towards the Atlantic. Because I was in the yard, the house overhang soon blocked my view of them, but I climbed to the roof on a tall iron gate. I was up in less than 30 seconds, but to my bewilderment they were gone. Thinking they had gone inside low clouds, I waited for them to reappear on the other side, but after waiting several minutes, they were gone.

For years I wondered about these events, and only now I am reporting them officially. They could not have been balloons because they did not wobble, or altered their distance from each other, and, most importantly, they did not move with the prevailing wind, since they appeared to go diagonally into moving clouds.

I am a serious person, I work in human services in my city. I would not deceive anyone by telling this story, and now, after many years have come to believe that the objects I saw may be extraterrestrial. If so, we are living in a very special historical period.