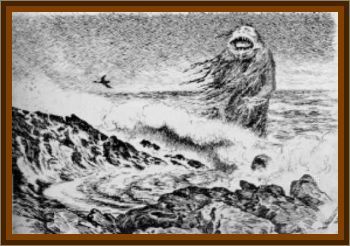 Believed to use Hishaku, women, to fill boats with water and make them sink. They are said to be the remnants of people who have died in shipwrecks and are attempting to cause humans to join them.

According to legends, there are various methods that can be used to protect from the harm they inflict, such as throwing O-nigiri, a Japanese food made from white rice formed into triangular or cylinder shapes and often wrapped in seaweed. into the sea or preparing a hishaku with its bottom missing.

They are also called Mojabune, Boko, or Ayakashi depending on the area.

Their appearance, as depicted in legends varies widely depending on the area. There are stories that speak of that appear above water, of boats that are themselves ghost ships, of ghosts that appear on human occupied ships, or of any combination of the above. They are described as appearing like Umibozu or Kaika.

There are many legends of at sea, but they have also been described as appearing in the rivers, lakes, and swamps of inland areas. In Kochi Prefecture, the Kechibi, a type of Onibi, is also sometimes seen as being a type of Funayurei.

They often appear on rainy days, as well as nights of a new or full moon, and on stormy nights and foggy nights.

When it appears as a boat, the Funayurei itself glows with light, so that it is possible to confirm its details even at night.

Also, by operating on the 16th day of Bon, the dead would attempt to approach the side of the ship and sink the ship.

Also, on a very foggy evening, by making the boat attempt to run, a cliff or a boat without a pulley would appear, and since getting startled and attempting to avoid it would result in capsizing and getting stranded on a reef, it would be no problem to simply push on forward, making it disappear naturally.

Other than attempting to sink ships, in the town of Otsuki, Hata District Kochi Prefecture, they are said to make the boat's compass malfunction, and in the Toyoma Prefecture, fishing boats that travel to Hokkaido get turned into a Funayurei, causing the crew to hang themselves. In Ehime Prefecture, when one encounters a Funayurei, if one tries to avoid it by changing the boat's route, the boat runs aground.

Also, in the past, to avoid shipwreck on a day of bad weather, people would light a bonfire on land, but a Funayurei would light a fire on open sea and mislead the boatmen, and by approaching the fire, one would get eaten by the sea and drown.

There are also various legends about how to drive away, depending on the area, and in the Miyagi Prefecture, when a Funayurei appears, they would disappear if one stops the ship and stares fixedly at the Funayurei for a while. It is also told that it is good to stir up the water with a stick.

Also, in Kochi Prefecture, it is said to be possible to drive funayurei by saying: I am Dozaemon, and asserting to be one of the funayurei.

In Ehime, one is able to disperse the by lighting a match and throwing it.