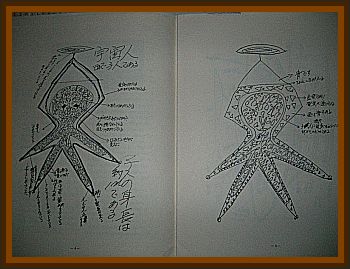 One of the weirdest alien abduction accounts there is began in the early morning hours of April 6, 1974, in the remote farming town of Kitami, in Hokkaido, Japan.

A farmer by the name of Yoshihiro Fujiwara was sound asleep in his bed when he was pulled from his dreams by the sudden pounding of someone at his door and his dog barking and howling outside. Considering his was a fairly isolated farmstead in the middle of nowhere, it was odd indeed to get visitors at 3:00 a.m., and the rather annoyed Fujiwara at first thought it was merely some kids messing around.

There would have been no reason in this safe little hamlet to think it was anything else, and he trudged to the door to fling it open to a sight that would change him forevermore. And so would begin one of the most flat out bizarre and controversial alien encounter reports that Japan has ever seen.

There standing in the chilly early morning darkness was a diminutive, 3' tall being dressed in a clear one-piece suit that seemed to be made of transparent vinyl, and the thing itself was only passingly humanoid, resembling what Yoshihiro would later call a combination of starfish and human, with four tentacle like appendages, a bulbous head reminiscent of an octopus clad in a blue helmet, slanted eyes, and a strange V shaped set of nostrils, the whole of it covered with mottled brown and slimy, bumpy toad like skin and rested on two of its stalk like limbs and rounded nubs for feet.

It was completely silent and motionless, except for its weird conical helmet had antenna jutting from it, which generated a visible electrical humming charge that ominously rippled through the air.

The startled farmer and this anomalous being stood there for several moments merely staring at each other, perhaps each as surprised as the other, before that strange frozen moment in time was shattered by a sudden movement from the creature as it flicked one of its tendrils to point up towards the sky. This was followed by a ray of blinding light that washed over everything, generating a profound heat that sent the frightened farmer reeling back into his house to slam the door shut.

A quick look outside showed that the brilliant orange colored light was emanating from an illuminated disk like craft that measured around 26' across and was apparently shooting off beams of orange light.

If Fujiwara thought he was safe merely gawking from his window at this outlandish sight he was wrong, as he suddenly felt his feet being pulled forward by some inexplicable force. At first he was merely dragged across the floor, much to his amazement, but then he allegedly began to hover, before finally being levitated fully off the ground to go flying out of the window and towards the inscrutable floating disc with its scintillating beams of light.

He was drawn faster and faster towards the object, seemingly on a collision course, but rather than smack against its metallic side he found himself being drawn through its walls to be dumped upon the floor of the craft.

The interior of the craft was described as being bright blue, with some sort of writing on the walls that the farmer could not fathom and the whole of it all overlaid with a repulsive stink that made him feel lightheaded.

It was then that two creatures identical to the one who had freaked him out at his doorstep approached him to tell him telepathically:

No danger. We promise to release you at your home.

As peaceful as this sounded, the two entities nevertheless made to grab him and forcefully hold him down, upon which Fujiwara felt the fear left him and his survival instinct take over, tearing away and dashing through an open hatchway to go careening through air to the ground below, which luckily for him was only around 10' down.

Fujiwara vaguely recognized that he was around 2 miles from where he had left, and went running wildly towards the house of a person he knew in the area, who let him in. It was at their house that he would realize that a full hour had passed, even though to him it seemed that it had been mere moments since he had been taken aboard the strange craft by its odd octopoid inhabitants.

Although the experience had been baffling if not a little terrifying, Fujiwara was at least relieved that it was over, and he quietly went back to his home to try and find some way to get over what had just occurred. Little did he know at the time that it was not quite over just yet.

The very next evening, Fujiwara was sitting alone in his house, his thoughts no doubt wandering back to those strange tentacled dwarves and their otherworldly craft, when he was suddenly overcome with a sharp pain worming its way through his ears and fingertips. He felt himself slipping into a daze, and for some reason his hands took on a life of their own and began to scrawl strange letters onto a piece of paper of their own willingness.

This was all followed by a voice that reverberated through his skull, which commanded him:

When the disk lands on the mountain you will come and board by yourself.

Which was accompanied by a potent vision of the area they wished him to come to, left blazing into his mind. After that the pain abruptly left, leaving Fujiwara there shaken and with bizarre hieroglyphics etched onto paper by his hand but the meanings of which he did not know.

The farmer took the voice’s command as being the nearby Nikoro Mountain, and although he was still frightened by his ordeal he felt a compulsion to go there to see what would happen. To this end, he gathered up some supplies and two companions to join him and they set out, unsure of what awaited them up on that lonely peak. Fujiwara apparently then made his way alone to the area he had seen in his vision, where there awaited that same luminous disk shaped craft and he boarded it without a fight.

Once aboard, the aliens then supposedly took him on a flight into space, flying around the moon and around the earth twice, all within about the space of an hour. When they returned from their dizzying journey the farmer then lost consciousness, after which he was apparently just left lying there on the mountainside for his friends to find.

This wasn’t even the end of it all, as Fujiwara would claim that the last trip had left him with strange telekinetic powers that allowed him to move objects and bend spoons, and he was telepathically invited on yet another excursion on April 13, 1974. This time the bizarre beings took him on a journey that went around the planet Jupiter, as well as the moon of Saturn, Titan, where one of the creatures would allegedly go out to retrieve a rock from the surface as a souvenir for him to keep.

This mysterious rock would go on to prove to be rather controversial, indeed. It was sent to scientists for analysis, but came back as just one of the many common rocks from a Kitami cave, which brought a fair amount of ridicule down on Fujiwara and his astounding tale. In the meantime, the farmer would begin to address himself as the earthly representative of the Summon Call Space Union, and he claimed that his telepathic powers increased exponentially, allowing him to levitate objects, predict catastrophes, and even teleport across vast distances, of which he would say:

I can teleport to a star 250 million light years away in 6 minutes. My role is delaying natural disasters such as earthquakes and eruptions. He would also claim that he could actually travel within the earth to stop volcanic eruptions, and pull together tectonic plates to prevent earthquakes. It is all totally bizarre to say the least, but one Japanese UFO researcher named Ninichi Arai has offered evidence that there was something to this when he found that several other locals who did not know Fujiwara also reported seeing strange lights in the skies during the same time frame, and there were others who claimed to have been first hand witnesses to the farmer’s mental powers, somewhat corroborating his weird tales.