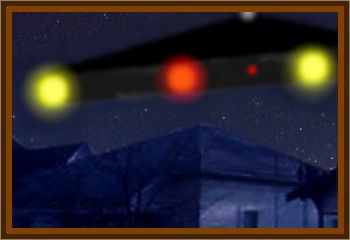 On the night of the new moon in July of 2007 I was on duty at the ATX truck yard it was after midnight and my shift was over, we had just began to chenge over and something appeared over the northern horizon and it appeared to look like the moon but comming from the north.

I ignored it, then realized that is not where th moon comes up from, but it was kind of glowing. It rose up on the horizon like the moon would very slowly but it had a kind of red orange glow to it.

I watched it for a while then just ignored it and began my long trip home,heading east on I-20 from west FT Worth. As

I pulled out to I-20 I got a full view of the craft from the back. It was saucer shapped about 2 stories high with a wide metal band in the middle with 5 rows of colored flashing lights blinking and shifting, it would pulsate then the lights would change colors the rows of lights would shift directions bink and the change the pattern again.

The road was always almost empty, so I slowed down to observe the object. It floated on what looked like black fumes, it made no noise, and as I got closer I could hear the Chinook helicopters.

I thought OK this must be a collage prank, so I sped up to observe from the side of the craft. Then the top of the craft began to rotate, I thought wow what great trick, but I didn't see the choppers but I could hear them in the distance the rotation just turned about 30° and stopped.

The whole time I was driving slowly observing the craft. It stayed on the north side of I-20 flying in a map of the earth fashion just then a blue beam of light laser like came through my car, it was a pinpoint and came through the car straight through but didn't damage anything. The beam centerd in my car then rotated over to me then flattened out from a pinpoint to a flat wide beam. The beam centerd on me then began to go up and down my body, no heat no noise. It made an up and down pass then went back to a point then blinked out.

Then I was just befuttled about this so I sped up faster to pass up the vehicle and as I watched it I could see an observation deck which was wide open I cuold see 5 occupants,3 greys and 2 really tall differant types they were tall with white silver hair and they were observing the road ahead, and holding hands with the greys like parents comforting children.

After I saw this I slowed down even more the craft kept moving up and dowh and alternating with the elevation of the land and I could still hear the choppers in the distance.

I observed the craft move ove a lighted football field, and so I thought OK it is a prank.

The craft was larger in diameter than a football field.

The craft then crossed the highway and proceeded in a south/southeast direction, then as more traffic became visible the craft moved in an unimaginable speed leaving streeks of light as it left.