I Saw 'Something' Too, Over Ft. Lauderdale, FL Did Anyone Else See It? 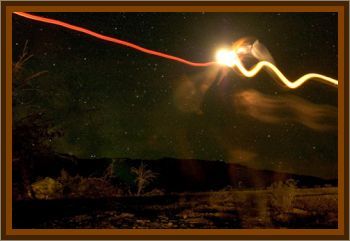 As part of my "Get Happy" thing I used to do a lot of things in and around Ft. Lauderdale so one night between the hours of 12:30 a.m. and 1:00 am I was headed home on I-95 headed south and watching the road when I see "something" that left a florescent green streak behind it making this impossible flight manuver that ended up as a perfect triangle when it was finished and this was all done in a matter of seconds like as fast as you can count "one two three". There was also another smaller comma shaped UFO with a corkscrew tail about the color of a sodium streetlamp that made this lazy "J" flight pattern into the bottom middle of the triangle.

After the comma UFO did it's thing the "trail" started to follow itself back the way it came which was from "right to left" and at the same speed until both it and the comma had just disappeared like it was never even there. Then about three nights later I was traveling home on the same highway at about the same time when I see what looked like a set of "helicopter blades" again florescent green, rotating at full speed that appeared to be coming out of a hole in the sky with two more of the comma UFOs on either side of it traveling perpendicular like it was escorting this thing. They were all in full view for about a second and a half then it disappeared into another "hole" straight ahead of it and, gone again.

Then two nights after that at about 2:00 a.m. I'm getting out of my car in the parking lot of where I was living at the time and I'm looking up when I see another single comma UFO going straight up and disappearing into the night sky. I finally asked my mother who watched the local news a lot if she had heard anything, and she said that she had but that it was just reported in a typical news reporter fashion that it was "Santa Clause" of course.

I feel sure that I was seeing these craft in the process of making a dimensional jump. I am also confident that what I had seen was the real deal and not some odd weather phenomena as the result of the cool, clear and crisp weather we were having at the time.

So after reading the stories and descriptions I can definately say "Yes we are being visited" and I feel certain that the government has evidence that they are sitting on for one reason or another and that I'm not expecting them to own up to anything anytime soon. The Holy Grail will just have to reveal itself when it's good and ready.