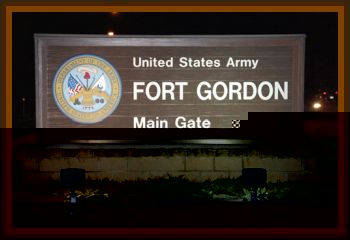 Our company had fallen out for morning formation.

We were waiting for the 1st sergeant to join us when someone in our ranks started saying:

I looked down the ranks of my platoon and saw that they were pointing at a point about 30° above the horizon.

What I saw was an object that first appeared to be a full moon only larger by half than I had ever seen it. As I continued watching it, it steadily grew in size until it was at least 5 times larger than I have ever seen the moon be. There were no light and dark areas on the surface such as the moon has, yet the surface was luminous and exactly as the moon would look if there were no other features on its face.

It sat there for about 20 seconds and then a beam of light started, and I do mean started because it moved out from the object very slowly, Its width being the width of the object itself but narrowing as it moved towards the ground, it looked like the beam of a flashlight in reverse only in slow motion it was about halfway down when 2 F-4s took off under military afterburner and banked straight for it.you could tell they were in afterburner by the length of their exhaust plume.

At the same time our first sergeant came out of the day room and after seeing what we were hollering about turned around and ran back into his office, apparently to notify someone.

The 2 F-4s formed up and were heading straight towards this object of which it was impossible to tell exactly how far away it was when the beam reversed direction, went back to the object and the object left moving straight away from us so fast it looked like what happened in those old tube type TVs when you turned them off and that picture shrunk down to a dot in about 1 second.

Ever since this happened, I have been interested in UFOs. Always expecting to read an account of this particular sighting. Mainly because not only was it viewed by my whole company, but apparently by the bases aircraft control tower and someone with the authority to scramble 2 military aircraft.

As soldiers we never heard another word as to what we saw. I can’t believe noone has come forward and told about this after so many years, so I am, for whatever it’s worth.