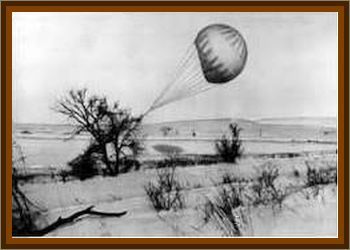 I was a 2 to 3 year old child when my father was transferred to a small government boarding school for American Indian children during WWII. The school was the now closed White Rocks Indian School near Fort Duchesne in northeastern Utah.

My mother tells the story that, while we were there, she took me out for a walk near the school. I understand that many UFOs are spotted in the Fort Duchesne area today, with some speculation by some that there may be a UFO base in the area.

During our afternoon walk, my mother said, a large, silvery object came into sight and made a 360° flight around us, then left. My mother, for decades, thought the object might have been one of the incendiary device balloons launched by the Japanese Imperialist forces from the Japanese home islands during the War. The Japanese hoped to start fires on the American mainland, and would launch them between November 1944 and April 1945, again, about the time I was two or three.

Some 9,300 Fu-Go's or balloon bomb”devices were sent aloft. About 300 were observed. They were an ineffective weapon, though six people across the western U.S. were killed by the devices. Damage from the bombs was slight.

However, when I became an adult, I asked my mother some questions about what she saw that day. She gave essentially the same explanation as above again. I asked if she would draw it. She drew a round object that may have been a balloon. However, she apparently did not see a dangling incidenary device or bomb. I think that, at the height she reported, about 500' above us, the device would have been plainly visible.

I then asked what else she noted about what she saw. She said that the device either shimmered or sort of shook while in flight. The object then, as I said, departed, I'm not certain whether to say it drifted off or flew away.

I was young enough that I don't remember the incident though I do remember some other happenings of the time, none of which involved a UFO.

I suppose I would not be filing a report, except for the facts that the object made the complete circle around us, and the object had a pecular movement.