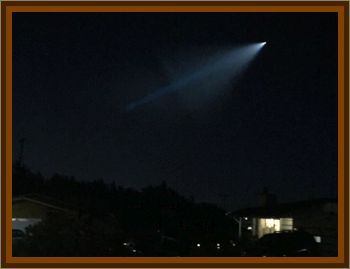 I was on guard duty in the Ft. Carson training area during the month of August during a Oklahoma National Guard summer rotation at about 1:00 a.m..Even though it was early in the morning I was alert for I was the only one on gaurd at the time in my platoon.

As I was roving my area I noticed a light in the Eastern portion of the sky. It was I judge to be at least 10 miles away and to have about 1500' to 2000'.altitude. The light was similar to that of an aircraft light and I watched it just to pass a little time. I probably would have lost interest but the light started to fly with erratic movement.It traveled to the south and as it did it would move ubruptly vertically down and then back up.

At the distance I would say that these vertical movements were anywhere from 500' to 1000'. The light continued to do this for maybe 1 minute, and then continued moving south until out of sight.

There was no sound and the sky was clear and no other aircraft were in the sky at the time. I thought of waking the other members of my platoon but, it was my first field excercise with them and I didnt think that they would believe me or appreciate being woken from their sleep.

I am presently in the regular army, and I have been since 1990. I have seen military aircraft and civilian and I have never seen anything out of the ordinary since then. When it started moving funny I moved so that there was a small tree brach between field of vision and the light, At first I thought that it was me moving up and down and not the light but, using the limb as a reference I decided otherwise. I didnt have the hair stand up on my back or anything like that but it just seemed very odd.

I would be happy to answer any questions pertaining to this event.