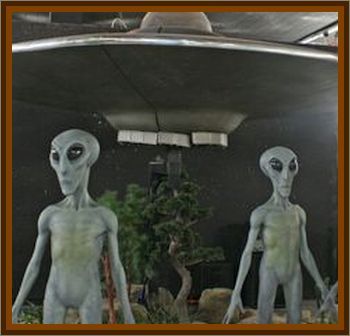 At about 4:00 a.m., Mr. John H. Doe of Loveland was driving through Branch Hill on his way to Loveland. His headlights suddenly illuminated what appeared to be 3 men kneeling at the right side of the road. He first thought that someone was hurt, so he stopped his car to have a better look.

He discovered that the figures were non human, about 3' tall and grayish in color. Their clothing was also gray and seemed to be tight fitting, it stretched over a lop sided chest which appeared abnormally large on the right side, bulging from the shoulder to the armpit. Over this bulbous area hung a slender arm which appeared much longer than the opposite member. Legs and feet were not discernible because they were obscured by the vegetation in which the entities stood, but the John got the impression of something baggy.

The heads of these creatures, reminded John of a frog’s face, mostly because of the appearance of the mouth, it was a thin line cutting across the smooth gray face. The eyes, which lacked brows, looked normal, the nose was indistinct, and the top of the head appeared to have a painted on hair effect, comprised of what appeared to be rolls of fat running horizontally from above the eyes, over or around the whole head.

Mr. Doe said the middle one of the three, who was the closest to him, was first seen with his arms raised about a foot above his head and appeared to be holding a dark colored chain or stick which gave off blue white sparks. As John approached, this entity lowered the object to about the area of the ankle.

John said he wanted to approach closer to the creatures, but by the time he reached the area of the front fender of his car, one of them made an unnatural move toward him as if motioning him not to move closer, so for about the next three minutes, he just stood and looked, too amazed to be afraid.

The next thing he knew, he was on his way to Fritz’s office, chief of police.