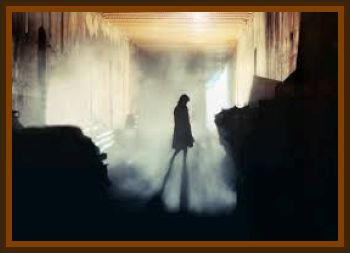 We lived in an old log house set halfway up a hill in the middle of a pasture field. There were no houses within a half mile of us.

A barbed wire fence completely surrounded the house to keep cattle out of the yard. At that time we did not even have electricity.

My dad worked as a helper on a truck and at times he was gone for a day or 2. One night mom and I were alone when the dog began barking. He went out into the pasture and then I could hear yelping and he came running back under the house.

There was a tremendous bang and the house shook and the windows rattled.

Both Mom and I were scared to death. The dog went into the field barking and once again raced back under the house. Again the loud bang as the house shook.

This happened a few times over the next month or so.

One night Dad was home and he opened the rear door and yelled to get out. It only happened one time after that. We never knew what it was.

My second strange event was many years later.

I grew up out there in the country and finally relocated and became a police officer. My wife and I bought an old farm with old house on it that was not worth staying in.

One night we were down there for the weekend and camped out far up in the hollow from the house. Where it was located was sort of remote. We pitched a tent and built a fire after it became dark.

Then I heard the strangest noises I had every hear coming from the woods above where we were camping.

The sounds were a strange mixture of growls, and something else I can not describe. I grew up around animals and I have heard a lot of dog fights. This was not a dog fight and it was extremely loud.

I grew concerned and fired my gun into the ground and it suddenly stopped. I slept a little uneasy that night. Never heard it again.