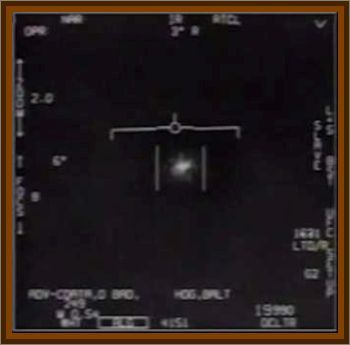 For the bulk of his 18 year career as a U.S Navy pilot, Cmdr. David Fravor said his mother-in-law used to ask him a question: had he seen a UFO? For 15 years, the answer was no. But on November 14th, off the coast of California that changed.

According to sources, in 2004 two F/A-18F twin seater Super Hornets from the aircraft carrier USS Nimitz were flying 100 miles off the coast of San Diego when a nearby U.S. Navy guided missile cruiser, the USS Princeton, contacted them and asked what weapons they were carrying. The Super Hornets replied they were carrying dummy AIM-9 Sidewinder air-to-air missiles that could not be fired.

Well, we’ve got a real world vector for you.

Fravor, the commanding officer of a Navy squadron at the time, said he saw a flying object about the size of his plane that looked like a Tic-Tac, after a break in a routine training mission. The object moved rapidly and unlike any other thing he had ever seen in the air. He has not forgotten it since.

Fravor's story emerged after the Pentagon publicly acknowledged for the first time the existence of a recent program dedicated to studying unidentified flying objects. The funding for what was known as the Advanced Aviation Threat Identification Program ran from 2007 to 2012. But officials familiar with it said some of its efforts have continued.

The news of the programs existence marks one of the significant disclosures about government research into flying objects, as well as the so far unproven possibility of extraterrestrial aircraft since Project Blue Book A lengthy Air Force study of thousands of UFO's was shut down in 1969.

Project Blue Book failed to find any technological developments or principles beyond the range of present day scientific knowledge, and no evidence of any extraterrestrial vehicles, according to the Air Force, though a small portion of the events it studied remain unexplained.

The encounter Fravor described was analyzed by the recent ATTI program, he said, but its most significant questions - the nature of the object and what it was doing, have also remained unanswered.

Fravor says he is certain about one thing:

It was a real object, it exists and I saw it, he stated in a phone interview, as he described his 2004 sighting.

Asked what he believes it was, 13 years later, he was unequivocal:

Something not from the Earth.

Fravor was the commanding officer of the A-41 Black Aces, a squadron of F/A-18 Hornet fighter planes doing an exercise some 60 to 100 miles off the coast between San Diego and Ensenada, Mexico, in advance of a deployment to the Persian Gulf for the Iraq War.

An order came in for him to suspend the exercise and do some real world tasking, about 60 miles west of their location, Fravor said.

He said he was told by the command that there were some unidentified flying objects descending from 80,000' to 20,000' and disappearing. Fravor said officials told him that they had been tracking a couple dozen of these objects for a few weeks.

The Super Hornets flew to investigate the last known location of the object and to their surprise, found two objects. The first was large and just below the surface of the water, causing the water to churn. The second object hovered just 50' above the water, moving erratically, and suddenly rose up and flew towards the Super Hornets, with one pilot.

When they arrived closer to the point, they saw the object, flying around a patch of whitewater in the ocean beneath. A White Tic-Tac, about the same size as a Hornet: 40' long with no wings, just hanging close to the water, Fravor stated.

The object created no rotor wash, the visible air turbulence left by the blades of a helicopter, and began to mirror the pilots as they pursued it, before it vanished. Commander David Fravor, saying it appeared it was rising up to meet him. As I get closer, as my nose is starting to pull back up, it accelerates and it's gone. Faster than I'd ever seen anything in my life.

We turn around, say let's go see what's in the water and there's nothing. Just blue water.

Fravor's plane headed back to USS Nimitz, but a separate crew that had taken off toward it began to search for it, tracking it for about a minute and a half and shooting a video, Fravor said. But Navy superiors didn't seem that interested in the event, so those like Fravor who had seen it, took a ribbing and X-Men jokes from their colleagues, and didn't talk about it much after.

Fravor, who retired from the Navy in 2006 later shared the story with his wife and children, and some others who'd ask. But nothing really came of it until 2009 when a government official he declined to name contacted him while doing an unofficial investigation. Fravor declined to give more details about the official, but said he was later contacted by an intelligence officer who ran the ATTI program at the Department of Defense that was just disclosed. The officer, who has since left the government to work for a private company that is hoping to promote UFO research for both scientific and entertainment purposes, is a large part of why the story about UFOs and the ATTI program are in the news, he quietly arranged to secure the release of three videos of UFOs from the Pentagon, including the one shot the same day and place as Fravor's sighting.

Fravor, who has been talking about his experience to the Stars Academy of Arts and Sciences, the company where the intelligence officer is a consultant, said he knows that sharing his story has opened him up to ridicule, most but not all of it good natured, but believes the incident should be more closely studied.

I don't think I was a nutjob as an officer in the Navy. I wasn't drunk, I don't do drugs. I got a good night's rest, it was a clear day, he said. I think someone should have looked into it.

Having talked to some of the other folks, it's a big frustration that it's coming out now and wasn't discussed back in 2004. He believes that there could be some benefits from studying it.

This is revolutionary technology to be able to accelerate, go up and down. Think about the advances that would bring to mankind, he said. What if it actually starts to get people to think outside the box.

He said he's been inundated with phone calls since his story was first told. Still, the X-Men jokes continue. There is no mercy in my family or my friends, he said.

There are several interesting details about the sighting here. For one, there were clearly two unidentified objects. The first was a large underwater object that was much larger than a submarine.

For reference, the U.S. Virginia class nuclear attack submarines are 377' long. The object also had some passing resemblance to a downed airliner. This was technically a USO, or unidentified submerged object. Although much rarer than UFOs, such craft have been sighted over the years.

Other than what we know now, it is described as wingless, white, and shaped like a Tic-Tac, from 24' to 30' long and had no visible markings or glass, little more is detailed.

The USS Princeton was able to faintly track the object via its SPY-1B radar system, but the fighters were not able to get a radar lock on the object. The capsule was not only more maneuverable than the Hornets but also much faster, for it to have reached the CAP point ahead of the Navy fighters it would have had to have flown in excess of 2,400 miles an hour.

According to FighterSweep.com, which published a detailed chronicle of the event in 2015, the object did not emit hot jet exhaust typical of ordinary aircraft.

There’s a whole fleet of them. Look on the S.A. This appears to be a reference to the Super Hornet’s synthetic aperture radar, which would have been scanning targets beyond visual range, implying that there were even more UFOs keeping their distance from the jet fighters.

The Department of Defense has released video of the unidentified object. The USS Princeton observed the UFO on radar, and six Super Hornets, totalling twelve pilots and weapons system operators saw the objects, and according to FighterSweep.com, which published an account of the incident in 2015, a seventh aircraft, a Marine F/A-18 was also involved.