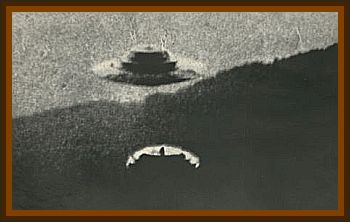 Perhaps France’s most infamous recent UFO sighting was made by at least 1000 of concerned citizens on November 5, 1990.

Very strange flashing lights were careening through the night sky.

Could they be bombs? Because of this very earthly possibility, French officials hustled to the sight to investigate.

Fortunately, France was not being bombed nor was it being invaded by extraterrestrials.

The official explanation for this highly witnessed event was that the flashing lights were rocket fragments burning up in the atmosphere.

The nearly 1000 witnesses who said they saw flashing lights in the sky on November 5, 1990, by contrast, had simply seen a rocket fragment falling back into Earth’s atmosphere.

We do not have the least proof that extraterrestrials are behind the unexplained phenomena, says Patenet, adding:

Nor do we have the least proof that they aren’t.

Philippe and his friend, Sandrine, were returning from the private clinic of Mousseaux in Evry, Essone, where they had gone to visit Josianne, Philippe’s wife, who had just that day delivered fraternal twin boys, Aurelien and Adrien.

One child was fair haired and the other was brown haired. They were born in good health. I saw their identity cards. They came into the world between 12:15 a.m. and 12:30 a.m, just after midnight.

Sandrine who drove the car, Philippe being a passenger seated on her right. They drove toward Mennecy, where they both live, and were travelling on D-153, parallel to the A6 motorway.

Arriving at the hill village of Lisses about 7:00 p.m. – 7:15 p.m., they saw a strange object coming from their right. It was Philippe who was able to observe this mysterious object quite well, thanks to his position in the car. Philippe said that it seemed to be piloted or under good control.

The object came from the right, moving at a slow speed, comparable to that of a bicycle, and it moved consistently, without accelerations or stops. It did not emit any noise or heat, but rather a light smoke, like steam or water vapor. which issued from some white lights.

The UFO appeared to be a huge, compact, rectangular mass, with a surface shiny, like aluminum.

The length is estimated at about 600' and the height about 300'. In this mass there were many white lights, with some of them projecting large white beams. Within this rectangle, the lights seemed to be connected by a structure. The whole object stood out from the night sky, being therefore clearly visible.

The UFO was seen through the front windshield by Philippe, seated as a passenger on the right side of the car. Then the car was stopped and the machine was observed through the lowered side window.

The distance of the witnesses to the UFO was difficult to estimate, perhaps between 1500' and 3000'. And, per Philippe:

All I can say is that I will never be able to forget this November 5th, because my wife brought twins into the world that day.