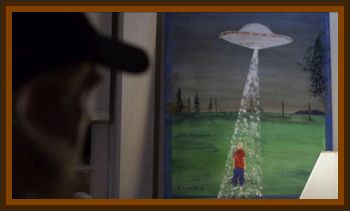 Ray Fowler alerted Ed Fogg, Jr. and myself of a UFO encounter that became a watershed for my study of the nature and reality of UFO/human interaction.

On that clear, bitterly cold evening at about 6:30 p.m., a 13 year old boy returned from his backyard, white with fear, declaring to his half believing mother and step father that within the last 20 minutes he had been struck by a beam of light from a UFO that seemed to appear above him from nowhere and to hover so closely that he could estimate its size to be bigger than a house.

Investigation that same evening revealed that the youngster felt he had experienced paralysis, a mumbling in his head, and about 10 minutes of time during which he lost normal consciousness.

Most convincing to the investigators was a painless, sunburn like redness on the boy’s chest of which he was unaware until he was asked to remove his shirt.

Knowing that upsetting events in the boys life led him to talk about them in his sleep, the parents placed a tape recorder next to his bed as soon as he started to sleep talk about the evening’s events.

Recorded, were a series of statements that were clear indications of his encounter experience.

In the days following, a number of seemingly paranormal events were reported that implicated the 13 year old as the agent.

On reliving the incident in a regressive hypnosis session several weeks later, the boy’s mumbling in his head became a mental communication from a being who was perceived in a row of windows around the UFO. It was a message to reassure the percipient that he would not be harmed and that they wanted to examine him.

In all UFO cases, attempts must be made to gauge the motivations of those making claims. Desire for publicity or notoriety must be evaluated. In many cases it is difficult to make a judgement on these points but in this case the family had every reason not to publicize the son’s claims.

The mother was in the middle of a custody battle for her son with the boy’s natural father. Any publicity, she felt, would prejudice her case negatively. Thus, motivation for an attempted hoax was considered nonexistent.

Now, more than 17 years after the events, I am more then ever convinced of their reality and the case’s importance for my own understanding of the nature of the UFO experience.