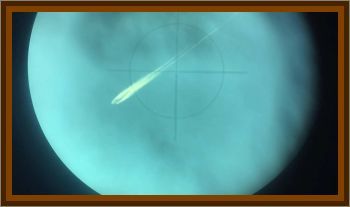 The duration of the sighting was 4 to 6 minutes. The object was not visible to the naked eye. The shape of the object was described as circular, with an apparently flat ring around the object, and a rounded dome in the middle. It appeared white to silvery white in color. No metallic luster was noted. There was no noise, no smoke, no exhaust, and no vapor trail.

The observer estimated that the cirrus clouds were at 30,000', and that the object appeared above them. The upper air winds during the day were from the SW, the direction in which the object was travelling. The observer stated that he had seen high altitude balloons through a theodolite, and they did not look like this object.

He estimated the object’s minimum speed to be 540 mph, and its diameter as 30'.