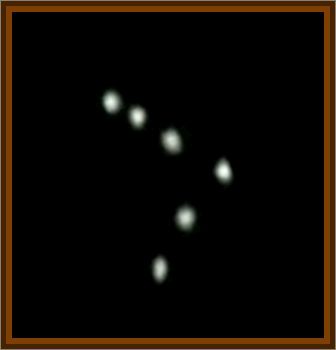 I was student of secondary. After the 7:00 p.m. with my family we saw a triangular formation of some 6 to 8 objects that emitted light of colors yellow, green, orange, blue, reddish, descending to over a mile of my house in a hill to some, toward the NW of San José.

Then the objects lower and they then appeared more in similar formations and did they also lower, go down to land?. Always stayed a ship in the air, without descending, getting larger.

The location of Conception of Alajuelita witnessed the alarmed event, somebody called to Radio Clock, more popular station of notices, in order to warn of the event. To the while, for fatigue of seeing many that go and come, without noise some, many witnesses were gone retiring to sleep. To the being the midnight, suddenly, to the front of the district, in a site of filly with cultivation of coffee, to some 250' appeared a red sun: a sphere the double of size that a ball of basketball 3' to 6' to some 6' of height off the floor, still, without movement, of a red yellowish tone.

The following day, from the crossroad of The Gardenia, a hill, we saw whatever that it turn their face, in that place a silver shine, like of a roof in dome, that reflected the rays of the sun.

In 1986, working with the Ministry of Atmosphere and Energy in the Refuge of Life Wild Black Pipe had, with witness, other sight in form of cylinder or pure of tobacco, including a contact of answer with signs of light.