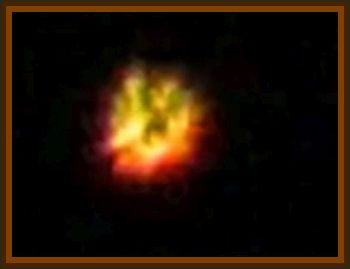 To start with I was sober and with 3 other people who were also sober or I would never have told anyone of this experience.

We were living in a lakefront house and often went out to the middle of the lake at any hour of day or night just to park and be romantic with my roommate Larry and his girl, and my now current wife Kristen.

This night I noticed a strange light that appeared as a flaming ball, orange and red with flames licking upward then like tongues of fire vanishing over the ball. It was moving from West to East and was to the North of us, how far away we could only estimate by the upward speed of the flames. It appeared to be about 500' up traveling at about 50 mph and approximately 1000' from where we were parked in our 12' Sears fishing boat.

After traveling about 1000' in a straight horizontal line the light went out. I tried to make sense of it thinking it must have been a helicopter with some kind of weird light on it, yet it made no sense that we could not hear it on such a calm and quiet night. It had to be close enough to hear as the light had lit up the shore line less than a ½ mile away as well as the water between us and the shore.

We all wondered what we had seen then said oh well whatever it was it was sure strange.

After a minute or so we had changed the subject when from the eastern horizon the same ball of fire shot up from what appeared to be to be around the world at a incredible high rate of speed, then stopped instantly in the sky directly above our boat.

It was hard to tell how far up it was hovering, we could see the flames moving up and around the soft ball sized object, as though we could almost reach out and grab it yet it was out of reach. I start jumping up and waving my arms at it and hollering here we are Hello. My friend Larry soon joined me as the girls screamed and cried, begging us to stop it.

My thoughts were that the water was about 25' deep and I could swim to the bottom of the lake if it came after us and hold my breath as long as I could to avoid contact or abduction if need be.

Fire and water don’t mix was my reasoning and I would be safe there.

It stayed directly above us for what seemed to be a minute or two, lighting up the water all around us and the inside of the boat just like the same kind of light a campfire would cast at 15' away. I was reaching up to try to grasp it just to make sure it was not within reach.

It could have been no more than 500' or so above us, it was hard to tell except for knowing the speed that flames travel upward, as we could see the flames clearer than before.

After a period of time in the same place the object shot almost straight up and toward the southeast leaving a streak of light or trail behind it and then disappeared among the stars getting smaller until it was the size of a pin head before it disappeared, all in less than a hundredth of a second. It went from still to what seemed to be the speed of light without any transition or graduation in speed just instant acceleration like nothing I have ever seen.

The girls were pretty shaken up and wanted to go back to the house. I was also shaken but pretended not to be afraid and did not hesitate to start the motor and head for shore calling it a night.