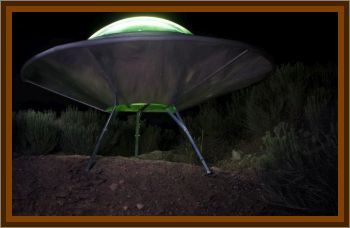 Karl Barlow was driving his truck on Highway A-338 near Fordingbridge, and as he rounded a bend in the road, he became aware of a strange object above some trees on the right hand side of the road. It was approaching, and when about a quarter of a mile away, the lights and radio of the truck went dead, although the truck's diesel engine continued to function.

Without lights, Barlow decided it would be best to stop, and brought the truck to a halt as he observed the object descend toward the surface of the road about 50' ahead of him. He sat transfixed and watched as an opening or porthole in the bottom of the thing began to put out a tube like attachment which resembled the flexible hose of a vacuum cleaner.

At the end of this tube was a box like affair from which four short tubes protruded. During this maneuver, the main object seemed to emit a high pitched whine. The box was then directed to the side of the road and the four short lengths of hose sucked up grass, gravel, and dead leaves from the roadside. The box was then transferred to the other side of the road where it did the same thing, then the box and the hose were withdrawn into the porthole and the porthole closed.

The craft hovered for another 30 seconds, still making the whining sound, then ascended into the air, taking off in the same direction from which it had come, to the right of the truck. Barlow described the main object as about 15' in width, egg shaped, with an out of this world green color. A small, white, saucer shaped form was visible on its underside during its departure.

During the time that the object hovered over the road and sucked up material from each side, another vehicle, a white Jaguar with one passenger, which was coming from the opposite direction from that of the truck, pulled up when its engine and lights failed. When it stopped, the UFO was between the truck and the Jaguar and both drivers got a good look at the object.

Upon the departure of the UFO, Barlow went to a phone and called the police who came upon the scene shortly thereafter. The Jaguar driver was still there as he could not start his car since the battery was dead, as was the truck's battery. Barlow, described by police as being in a terrified condition when he reported the incident, duly made his report which was carried in the English press. The Jaguar driver, however, had had a couple of drinks and did not want to submit to a breathalyser test and therefore did not make a report. Both vehicles were tested by the Royal Automobile Club official testers and were found to be in good mechanical condition. The truck's battery had been charged shortly before the incident took place and there was no reason found for the condition of either of the batteries. Other interesting points of information about this case include the fact that the truck's lights and radio came back on, he had not turned them off, when the UFO was about a quarter of a mile away on its exit flight.

Constable Roy Nineham who was in the patrol car and who had investigated this report said:

The most startling part of his report is that his lights failed and came on again when the object he saw disappeared.

Another police spokesman made this statement:

There is no explanation for this. We have no reason to suspect the informant's story.

The ground clearly showed that two areas, one on each side of the road, were absent of leaves, gravel and grass.